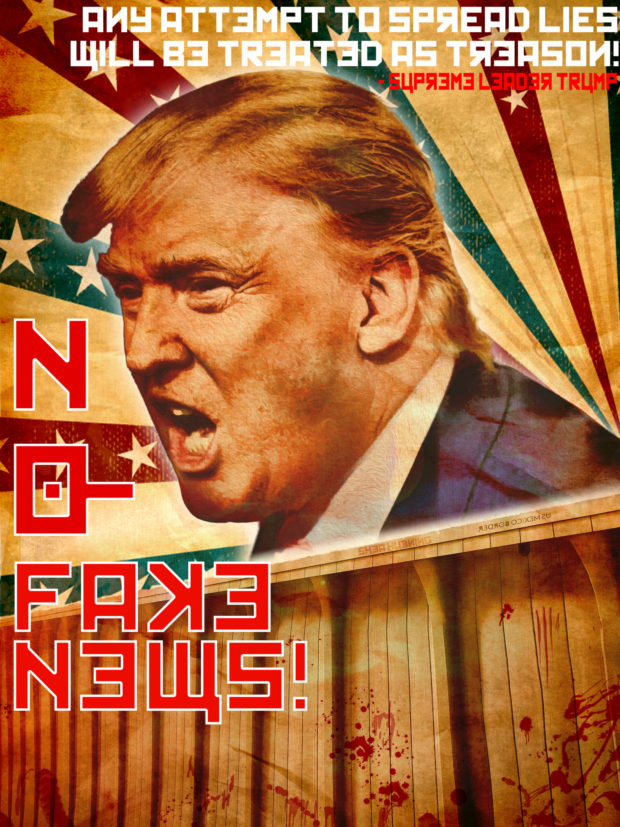 There is a sense, this week, with Trump’s shifting stories on his payout to Stormy Daniels, of a crescendo in the administration’s run of obvious falsehoods. What’s striking is how easily falsifiable so many claims have been. Last winter, for instance, Trump announced “the biggest tax cut in the history of our country.” By any of the Treasury Department metrics, though, the Trump legislation falls far short of the all-time top position. As a share of the economy, for instance, it comes in 12th[1]—behind cuts as recent as 2013, never mind the rest of US history.

Kellyanne Conway gave a memorable name to this phenomenon, in her response to criticism of one of the most famous early falsehoods—Sean Spicer’s misrepresentation of Trump’s inaugural crowd as “the largest audience to ever witness an inauguration, period.” Spicer didn’t present false information, Conway said. He “gave alternative facts.”[2]

The backlash was immediate: “Alternative facts are lies,” columnists proclaimed.[3] But the backlash was also strangely impotent. Again and again, a sizeable portion of the public is persuaded to the administration view despite easily-checked facts. Evidence and research fail to persuade; our usual modes of verification no longer lead to the consensus we’d expect.

Of course, sometimes the truth is hard to get at. Research studies are not always reproducible, and the way experts collect data plays an important role in the trends they uncover. But the “alternative facts” we’ve seen recently do not reinterpret complicated data sets or bring new information to light. They make claims without offering any evidence at all.

It’s paralyzing. If evidence does not matter to our arguments, ordinary methods of debate and conversation fall flat. We have lost common ground. How do we build policy when we disagree on reality? How do we respond to the fictions in “alternative facts”, when facts themselves seem ineffectual?

I argue it’s through fiction even more blatant: literature itself.

I recognize that this may seem an unhelpful suggestion. Who has time for Anna Karenina right now, when there are real-life trains that are going to hurt real-life people if we don’t pass some infrastructure legislation? And if we’re focused on figuring out what’s true and what’s not, surely fiction is the one place that doesn’t need our attention: it announces flat-out, This did not happen.

But that label is literature’s very strength. In this world where facts are uncertain, we have found a single point of agreement. Fiction did not happen, and everyone knows it: Mrs. Dalloway never lived, Hamlet never died, and you will not find Sherlock Holmes on Baker Street.

Fiction is a chance to take a breath from our disagreements about what did and didn’t happen. At last, some common ground! We are looking at the same narrative, and we agree on its factual status—in other words, that it is not factual. Of course we’ll all respond to that narrative differently, and we’ll all bring our different perspectives and experiences to bear. But a novel gives us two definitive points of commonality: first, that these are the words we’re reading; and second, that they are fiction.

Perhaps this does not seem like much. But when you consider the situation in which we find ourselves—unable to agree on basic facts about how the world actually is—such agreement is significant, and potent.

Reading together is a way for us to see together. The author gives us a perspective: we cannot see the world she has created except through the eyes she gives us. We cannot look to the right unless she looks to the right; we cannot check under the bed unless she says that we will. Fiction requires that we all inhabit the same way of seeing: noticing the same things (because we can notice nothing else); moving the same direction (because it is the author who directs).

Authors help us speak together, too. In the same way that I returned from a trip to North Carolina saying “y’all” and “crawfish,” when we read fiction, we pick up on the way characters describe their world. Holden Caulfield’s profanity-laced diatribes, the rhythms of Janie’s storytelling in Their Eyes Were Watching God—these are languages that we learn as we read. When we spend time with a character, we start to absorb her particular way of speaking; we start to see with his particular lens on the world.

In our political realm, we’re not there yet. We are having profound trouble learning each other’s ways of talking and ways of seeing. But fiction is a start. We may find each others’ lenses to be opaque, but perhaps we can see together if we look through the eyes of Holden or Janie.

But does seeing together really make a difference? After all, there’s plenty to dispute, if not in fiction, then about fiction: just look at banned book lists or local fights over the 9th grade English curriculum. Agreeing that Colonel Aureliano Buendía is not a real person does not free us from myriad other divergent beliefs.

Sometimes our disagreements are relatively straightforward: “This language is offensive,” or “This content is too graphic for teenagers.” But often the critique goes deeper. “The author ignores the harm that comes from a unionized workforce,” we might say; or “This novel gives a troubling portrayal of women as one-dimensional and without agency.” As we read literature, we find that we evaluate even as we engage.

To say “fiction isn’t true,” then, seems to miss something important about the works we’re reading. Our varied responses suggest that fiction actually does make truth claims of some kind. We must think there’s something that’s trying to be true in literature for us to bother disputing it. What kind of truth is it, exactly? Some philosophers say that instead of teaching us that or how, literature makes a claim about what something is like. Others argue literature doesn’t posit anything new, but rather reorients us toward knowledge we already have: we recognize its significance; we consider its implications.[4]

But this is an open question, and a difficult one. I only bring it up because it comes up: sometimes we read a book and say, “This doesn’t feel true,” and we mean it separately from the obvious sense in which none of this actually happened. Fiction seemed like the one safe place, didn’t it? And yet here we are talking about what’s true and what’s not.

But at least when we discuss a novel—when we argue about how it portrays women, and if we like how it portrays women—at least we are talking about the same novel. At least we are working from the same text; at least we have looked through the same eyes. Fiction does not protect us from disagreement. But it does help inhabit other perspectives. And even if those perspectives do not supplant our own, we have seen with them, we have shared them, we have learned from them.

Fiction helps us build empathy. I don’t argue that this is all it does, or even the most important thing that it does. But we find ourselves at a bizarre impasse, unable to agree on anything—and fiction gives us a productive way to move forward. We need a point of connection, and we need to get better at making connections. Literature gives us a place to start.

Of course, this is the long game. Books take time to read, and empathy is not a one-click purchase. Fiction lets us engage with one another. But how do we engage with “alternative facts” themselves? Can literature help us find anything to say?

As always, when we hear claims of fact, it is crucial to test them—to look for relevant evidence and consult with experts; to try to understand how the world actually is. But fiction teaches us that if the claim is false, we must not walk away. It is worth paying attention to things that did not happen, and literature helps us understand what kind of attention to give.

The invitation, then, is to read political fiction as we might read literary fiction. What do we see when we look at the world in this way? What is the story you’re telling, when you describe the inauguration crowd as the biggest in history? We don’t learn facts from Trump’s comment about the tax plan. But fiction has taught us how to see what a narrator sees without confusing it with what is actually there. Together with Romeo we notice Juliet across the room, even as we recognize that there is no room and there is no Juliet. We feel what it is like to catch Juliet’s eye; we understand the kind of person Romeo is to respond as he does. Likewise, together with Donald Trump we look at the tax legislation and feel what it is like to call it the largest ever; we feel what it is like to want to call it the largest ever.

Fiction is not a waste of time: there is something to see beyond determining whether these events happened or not. When the claim is that they did take place, by all means press on their veracity: question and cross-reference; validate or invalidate. But if they indeed prove to be fiction, do not give up on them. Pay attention to the narrative that these “alternative facts” are constructing. Consider the values and self-image that they imply. Listen with empathy for the characters in that world, their desires and beliefs, the themes that resonate.

And then invite them to join your book club.

[4] Dorothy Walsh, Ted Cohen, and Catherine Wilson, among many others

Maisie Wiltshire-Gordon
Maisie is fascinated by how language works and the ways we put it to use. She is looking for answers through storytelling, philosophy, and everyday conversation. As a strategy consultant, she is particularly interested in the role narrative has to play in business transformation. Maisie lives in Cambridge, MA.

Maisie is fascinated by how language works and the ways we put it to use. She is looking for answers through storytelling, philosophy, and everyday conversation. As a strategy consultant, she is particularly interested in the role narrative has to play in business transformation. Maisie lives in Cambridge, MA.