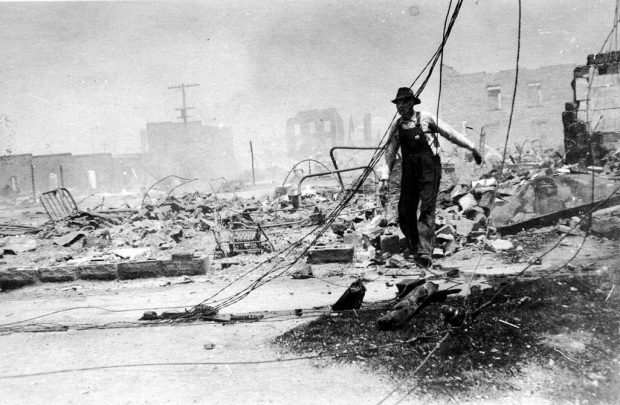 When my husband and I were much younger and had more leisure time, we decided to binge-watch Buffy the Vampire Slayer. It was my husband’s idea. I had watched the show when I was a teenager but didn’t religiously tune in every week. About three episodes in, I realized this was not one of our best decisions. My husband is 6 feet tall, broad-shouldered, with arms the size of my abdomen, but he is a total wimp when it comes to scary shows and movies. In the middle of the night, I woke up to him walking around our tiny apartment with a novelty ninja sword, similar to the one each of his brothers owned. Something about a childhood love of anime. He claimed he heard something in the kitchen. I understood why he was frightened and we giggled ourselves into enough bravery to go back to bed and didn’t click play on Buffy the next night.

When I met my husband, I was at a church in Tulsa, the one I’d joined soon after moving from New Jersey to Oklahoma. The church was called Greenwood Christian Center, and it was named after the street corner of Greenwood and Archer, the place where “the single worst incident of racial violence in American history” took place. When I was in high school, I’d never read about the Tulsa Race Massacre, a term I much prefer to the “Race Riot” as it is more often referred to. Over the course of two days, May 31 to June 1 of 1921, the white people of Tulsa terrorized 35 square blocks known as Black Wall Street; another piece of history I’d never learned about. The Greenwood district of Tulsa was the wealthiest Black community in the United States at the time. Someone once told me that money could change hands over and over again amid Black society there without ever leaving Greenwood.

I have not watched the video of George Floyd’s murder. I don’t know if I ever will. I have seen the still images and read the transcript. For me, that is already too much. I understand that the footage must be something wholly different from the other killings caught on tape. Floyd’s slaying has galvanized a nation and energized people of all races and ages to come together and protest nationally and globally. Some people have supposed that the reason the response to his death has been so much greater than after the death of others before him is because he called out for his deceased mother while dying; a fact that brings me to tears. I’m not sure I need to see the video.

Months into quarantine in New Jersey, a state hard-hit by Covid-19, I took my four-year-old daughter, who is biracial, to a drive-thru ice cream parlor about twenty minutes from our home. It was 3:30 pm, and I’d been teaching high school online since mid-March. We just needed to get out of the house.

On our way, we passed by a large protest being held on Route 130 in Willingboro, the town where my mother grew up. They held handmade signs, wore masks, and asked the cars to beep in solidarity. The group cheered when I laid on my horn, perhaps encouraged that a white lady in a pick-up truck agreed with them.

My daughter asked what all of the people were doing. I was driving and couldn’t look back at her in the car seat behind me, but I told her that for a long time, people with white skin were terribly mean to people with darker skin like Daddy. I had introduced the concept of slavery a few days before when I told her that everything has a price and she replied, “Not people. You can’t buy people.” I had to tell her there was a time when other people did.

Our house had already been so heavy with the deaths of Ahmaud Arbery and Breonna Taylor, so that when George Floyd was suffocated on Memorial Day, my husband, usually the bubbly life of the party, had retreated to his office during most of the waking hours. I asked my daughter if she’d recognized how sad her Daddy had been over the past few weeks. She said she had and I told her these people with the signs were sad, too. They were upset.

“What do their signs say?” she asked.

I asked, “What do you think about Daddy and Mommy not having the same color skin?”

I could see her shrug in the rearview mirror. “It’s normal. You’re a nice white person and you don’t hurt people like Daddy.”

I quietly wept until we reached the drive-thru window.

The last time my husband visited his mother, who still lives in Tulsa, he said she was headed to a protest in North Tulsa, where she and all of the descendants of the survivors of the Tulsa Race Massacre still live. When the white people killed Black people and burned down Black Wall Street in 1921, they also chased all of the Black residents to the northern border of the city, which is where the terrorized and threatened community made their new home. They never got their old homes or businesses back.

My mother-in-law was protesting the opening of yet another Dollar General on the Northside, which was already inundated with dollar stores and unhealthy food options. There are no grocery stores of any kind on the Northside. You’ll have to go South for that, where the white community of Tulsa continues to thrive to this day. On the Southside, you’ll find the restaurants, hotels, movie theaters, bakeries, and all other places to spend your money. My husband’s mother was organizing a boycott of the Dollar General, demanding that the Northside’s status as a food desert come to an end.

That was almost two years ago. There is still no grocery store in North Tulsa.

The piano player at Greenwood Christian Center was named Joey Crutcher. He was always kind to me whenever he saw me at the church. He was a stocky Black man, broad-shouldered like my husband, and bald. When I was nineteen, I tried out for the praise team and Joey accompanied me on the keyboard for my audition. I ended up joining an independent choir, perhaps as the token white girl, and traveled the city with them instead, but all of the musicians in Tulsa, of which there are many, knew Joey and the Crutcher family.

When police gunned down Joey’s younger brother Terrence in the summer of 2016, I did watch that video. The footage started automatically as I was scrolling through Facebook on my phone. The video was captured from the helicopter overhead and that angle let me have enough psychic distance from the event to view it. The pilot remarked that Terrence Crutcher looked like, “a bad dude,” who “may be on something.” The murderer, Betty Shelby, claimed that she thought he was going to his vehicle for a gun. No weapons were recovered from his car. It was around this time that I started praying every time my husband had to drive anywhere alone. I had been fearful in the past, understanding the inherent danger race played in my husband’s life and the lives of other Black men like him, but Terrence’s killing touched my personal life. My husband, in all his stocky glory, could be perceived as a “bad dude” to some officer one day, too.

I made the mistake of watching HBO’s series, Watchmen, without much background information. I didn’t think I was going into it blindly because I had watched the 2009 film of the same name long before. It opens with a young Black boy watching a silent film as his mother accompanies the movie on a piano. The empty theater was the first signal to me that something terrible was about to happen. I had no idea that once I left the velvet chairs of the movie house with the boy, Will Reeves, I would be hurled into the middle of the Tulsa Race Massacre happening just outside. Bodies dragged by wagons, people shot at point-blank range, successful businesses pillaged and burned. I gripped my shirt with my hands and sobbed for the rest of the episode. I told my husband that I was unprepared for the opening and asked him to watch the pilot episode on his own so that we could watch the rest of the series together and I wouldn’t have to relive the nightmare that was his real-life ancestors’ experience. What a privilege to be able to turn away.

On the way home from getting ice cream that day, my daughter and I took the same route that took us by the protest again. It was wrapping up and the police stopped traffic to allow the people to cross back over into Willingboro from the other side of the road. We were right at the light when this happened, so we had a lot of time to sit and watch the protesters with their signs walk past. My daughter and I talked some more about people with white skin hurting people with black and brown skin and why that’s so wrong. Once traffic started moving again, she told me, “I’m so glad Daddy has his sword.”

The blunt, couldn’t-cut-through-steak ninja sword had followed us from that tiny apartment in Tulsa back to my native New Jersey six years ago. My husband still keeps it by his bedside, believing his brute strength could turn it into a real weapon. A pacifist by nature, even I wanted to be encouraged, like my daughter was, that it will be enough to keep him safe in America. 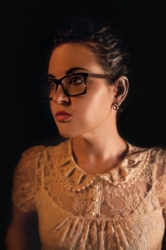 Celeste Cosme
Celeste Cosme is an MFA candidate at Rosemont College. She has taught high school English for fourteen years. Currently, she is working on a YA novel about kids at an alternative school in New Jersey, like the one she's at now. She lives with her photographer husband and curious four-year-old daughter. "For Greenwood" is her first published piece.

Celeste Cosme is an MFA candidate at Rosemont College. She has taught high school English for fourteen years. Currently, she is working on a YA novel about kids at an alternative school in New Jersey, like the one she's at now. She lives with her photographer husband and curious four-year-old daughter. "For Greenwood" is her first published piece.