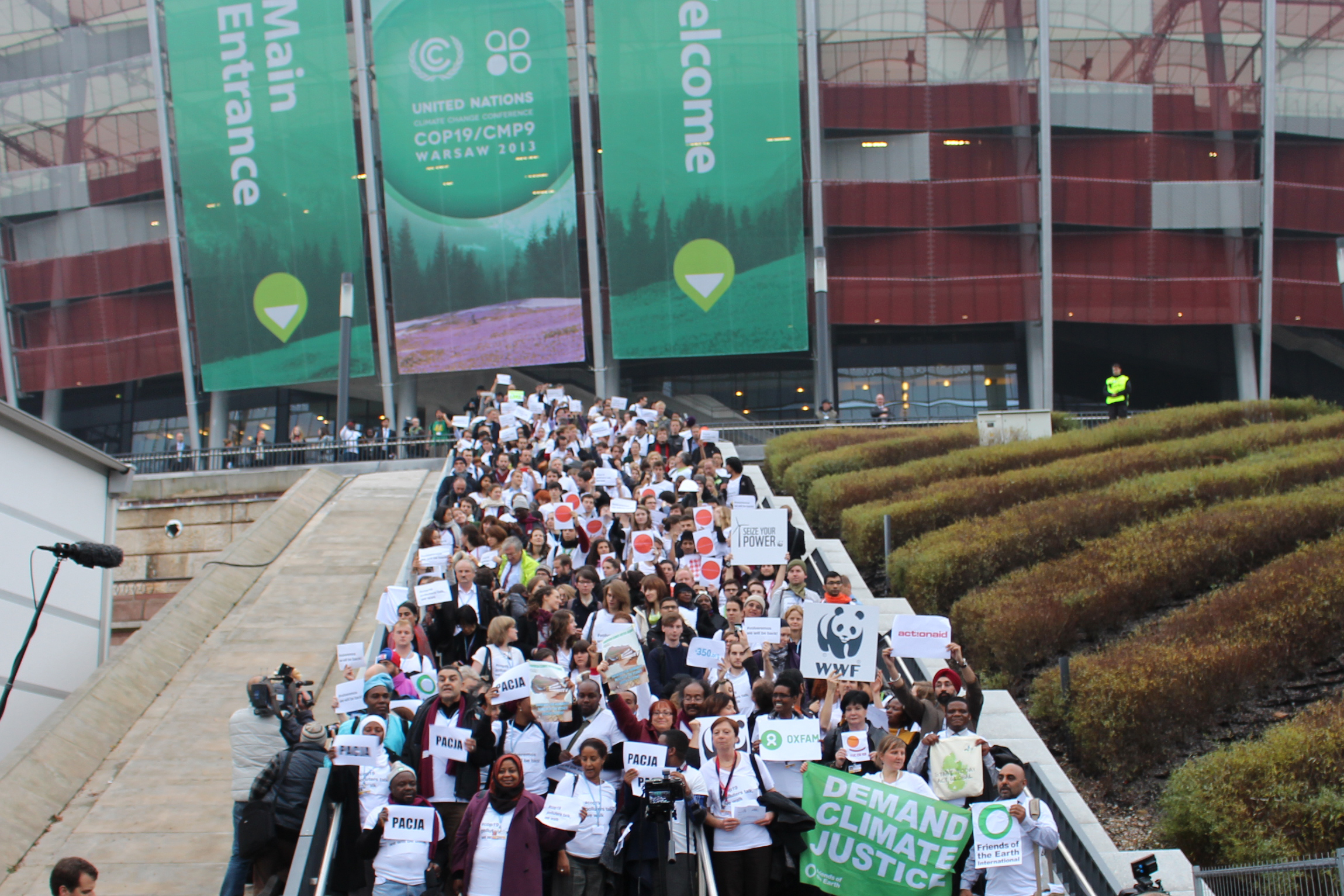 In September 1969, Nixon administration counsellor Daniel Patrick Moynihan wrote a prescient memorandum about the rising carbon dioxide levels in the Earth’s atmosphere. Although noting the need for more scientific research to understand this trend, Moynihan felt confident declaring that it “very clearly is a problem.” He warned of a possible “apocalyptic” future if global warming caused sea levels to rise, declaring it would mean, “Goodbye New York. Goodbye Washington.”

A few years later, Moynihan (now U.S. ambassador to the United Nations) again raised the alarm about an international crisis. In this case, Moynihan’s concerns focused on the challenge to U.S.  hegemony posed by a coalition of Global South countries demanding the creation of a New International Economic Order (NIEO). Moynihan opposed the NIEO agenda, believing its implementation would weaken U.S. power while also proving economically ruinous to rich and poor nations alike. He thus urged the U.S. to oppose the “emergence of a world order dominated . . . by the countries of the Third World.”

More than forty years later, Moynihan’s calls to action on climate change and global development are still salient. Yet, where he saw only danger, humanity must find opportunity. For the world to effectively confront the climate crisis and end global poverty will require a new world politics – one that treats the climate crisis with the utmost seriousness, while drawing on the spirit of the NIEO to ensure justice for the vast majority of the world’s population.

Seeing climate change and development as inseparable is not a new idea, as policymakers have discussed these intersections for decades. Where such deliberations were at first framed around the idea of “sustainable development,” today’s watchword is the more pessimistic phrase, “adaptation.”. In practice, adaptation means implementing policies that deal with climate change as a problem of the present. Already, in communities around the world, local groups, international NGOs, and some aid agencies are designing development projects that can survive intensified droughts and storms. Yet, it seems unlikely that local or even national adaptation efforts can be sufficient to meet the challenges of climate change without a parallel international politics.

A political agenda for dealing humanely with climate change will have to come from the Global South. Northern countries will, to varying degrees, provide aid and support for adaptation, as they are legally obligated to do under the U.N. Framework Convention on Climate Change. However, as the histories of so many past crises (such as the Great Depression) suggest, absent political pressure from below, it is unlikely even sympathetic policymakers will do what needs to be done.

The need for the world’s poor to exert political power is magnified by the frightening trends occurring in the politics of several key Global North countries. Ironically, as the realities of climate change have become more apparent, denial of the problem has also increased. Twenty years ago in the United States, Canada or Australia, the existence of anthropogenic climate change was not controversial. Rather, arguments about climate change focused on disputes over what policies could best ameliorate it. Recently, the terms of the debate have regressed. Now, in several of the most powerful nations, we are reduced to debating elementary science.

Given this context, the idea of a Global South alliance to tackle climate change might seem fantastical. Yet, precedent exists for African, Asian, and Latin American states campaigning to reshape the global political economy. That precedent is the same New International Economic Order that Moynihan warned of. Launched in May 1974 as a resolution in the United Nations General Assembly, the NIEO was a policy and political program intended as a roadmap for reforming the world economy in the interests of the Global South. The NIEO called for the establishment of institutional mechanisms to stabilize global commodity prices, increase foreign aid, and regulate the activities of multinational corporations – proposals that were substantial, but neither new nor revolutionary.

For a brief time, the campaign for the New International Economic Order inspired real concern among elites in the wealthy countries. The strong scrambled to contain the Global South’s newfound assertiveness at a time when the rich felt economically vulnerable and the poor seemed able to wield real political power. It was, after all, no coincidence that the NIEO declaration arrived only months after the OPEC-initiated 1973 oil shock.

OPEC backed the NIEO rhetorically, and some of its members (such as Algeria) were key players in the pro-NIEO coalition. Inspired by OPEC, some Southern nations attempted to build similar cartels for other export commodities. Explaining the politics behind such efforts, Tanzanian president Julius Nyerere analogized the global economy to a factory: the rich nations were the management, the poor countries were the workers, and commodity cartels would be the “trade unions of the poor” that guaranteed the South fair treatment.

Southern exertions produced tangible results. The United Nations created a Centre on Transnational Corporations, which conducted important research on multinational firms and development. In 1976, the European Community signed the Lomé Convention, an agreement that provided a bevy of trade preferences to many former colonies. However, the dream of a reformed global economy was not to be.

The governments of the U.S., U.K., and West Germany rallied against the NIEO, seeking in Henry Kissinger’s words to “pull [the] teeth and divide these [Global South] countries up.”  By 1976, rich nations had succeeded in accentuating divides within OPEC, breaking key nations away from the pro-NIEO coalition. This shift robbed the NIEO coalition of its main political leverage. Meanwhile, the wealthy nations offered only minor concessions in negotiations with the South, while blocking and undermining efforts at deeper change.

Northern resistance and divide-and-conquer tactics were not the only reasons for the NIEO’s demise. The pro-NIEO coalition’s political incoherence and the economic diversity of its members also contributed to splits forming in their ranks. Most critically, attempts to build commodity cartels failed. The culprit was the free rider problem: it only took one or two members of a cartel deciding to undercut the others to wreck the entire project. The NIEO campaign’s death knell struck with the explosion of the debt crisis in the early 1980s. The debt crisis not only forced Southern countries to become supplicants to the North, it also empowered those political forces in the South most favorable to free market reform.

Given this history, the idea of the world’s poor crafting a New International Climate Order appears a dubious proposition. Yet, in the era of climate change, expanding the boundaries of the possible is a necessity. Formulating an agenda will be the easy part. Since the early 1990s, a raft of ideas has emerged for addressing poverty and climate change, such as sharing clean energy technologies developed in the North with the South. Many of these ideas fit under an ideological vision of “Climate Debt,” which argues that Northern nations owe reparations to the South for the damages that the rich are, after all, predominately responsible for.

As with the NIEO however, such ideas will not go far without Southern political power. Here too there are signs of progress. In 2009, the Climate Vulnerable Forum was created, bringing together many of the nations most affected by climate change to have a collective voice in global negotiations. In 2012, a group of Global South countries (including India and China), formed the Like Minded Developing Countries, a negotiating bloc united by a shared rejection of Northern efforts to shift the burden of climate action onto the poorer countries.

The Like Minded Developing Countries has already solidified itself as an important player in negotiations. This is due to one of the most significant differences between the politics of the Global South today as opposed to the 1970s. Whereas in the 1970s, Global South nations’ main contribution to the world economy came through exporting agricultural goods and raw materials, today nations like Brazil or India are economic powerhouses in ways that the rich nations cannot ignore.

Another feature that augurs hope for today is the richness of Southern civil society. Groups representing indigenous peoples, women, and organized labor are more numerous and powerful than they were in the 1970s. Many Global South movements are engaged with climate change, working with both their governments and Global North NGOs to push for a pro-poor agenda. In November 2013, the tacit alliances between NGOs and governments exerted themselves in dramatic fashion at U.N. negotiations in Warsaw. Frustrated by multinational corporate influence and Northern reticence, a large coalition of Southern governments staged a temporary walkout. This action was reinforced by a walkout by Southern and Northern NGOs, expressing their profound frustration with the proceedings.

Despite the contradictions and hypocrisies easily found in all of these forces, an alliance of imperfect Southern and Northern players is the best hope humanity has. In the Global North, pressure must be brought by civil society and social movements for policy changes that benefit Southern communities made vulnerable by Northern prosperity. Southern governments will need to find ways of exerting economic and diplomatic influence to pressure the North to listen and to change. And Southern social movements will need to work to ensure that their governments serve the interest of the many, not the elite few.

When Moynihan wrote his memorandum in 1969, the dangers of climate change appeared distant enough that his main suggestion involved the U.S. spearheading a “worldwide monitoring system” for carbon dioxide emissions. We are now long past the point where technocratic solutions can suffice. As Indian climate activist Deepa Gupta argues, the way forward lies in “helping people self-organize so that their collective power could also have a large influence.” For only strategies that embrace an analysis of political power and which utilize a wide array of tactics have any chance of forging a world where equity and sustainability are synonymous.

The author wishes to thank Brandon Wu for reading an early draft of this article and his many insights.

Photo: “NGOs, SOCIAL MOVEMENTS WALK OUT OF WARSAW TALKS” by Adopt A Negotiator; licensed under CC BY 2.0 Image Cropped.

Paul Adler
Paul Adler teaches in the History and Literature concentration at Harvard University. He received his PhD in history in 2014 from Georgetown University. His dissertation, Planetary Citizens: U.S. NGOs and the Politics of International Development in the Late Twentieth Century examines campaigns by U.S. NGOs in the 1970s and 1980s to reform the practices of institutions such as the World Bank.