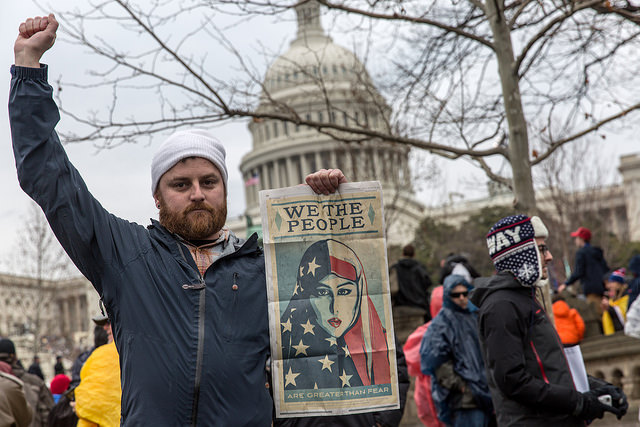 The new patriot is a listener.

The new citizen talks to strangers.

where neighbors pause (their shopping carts

with flour, milk, and eggs), to speak of justice,

honor, and honesty — while far to the east

a speech is being given in a foreign tongue.

Stand and Bow Down

“Keep your voice down and your head up

when trouble comes,” my father said.

“Shouting leads to blows, and blows

to everyone losing what the fight was for.”

I see the sturdy tree stand tall, then bend

when wind comes. I watch grass outlast the storm.

When a leader shouts, you have to listen better

than he knows how. You have to be what he might

learn to say, if you are eloquent in witness.

Note:  Kim Stafford’s father, poet William Stafford, was interned as a pacifist in World War II and nearly hung for his beliefs by an mob in Arkansas in 1943.  He spent the balance of his life writing and witnessing for peace, producing a body of poems, teachings, and questions that faced the propaganda and coercion of the McCarthy era and the Cold War.  “Tyrants depend on followers,” he wrote, exhorting us to stand up and speak out when the values of fact, justice, and humane treatment of fellow human beings is at stake. Kim Stafford’s book of post-election poems, The Flavor of Unity, is available at Lulu.com.

Image:  We the People, Inauguration Protestor, licensed under CC 2.0

Kim Stafford
Kim Stafford is the founding director of the Northwest Writing Institute at Lewis & Clark College, and author of a dozen books of poetry and prose, including Having Everything Right: Essays of Place, 100 Tricks Every Boy Can Do: How My Brother Disappeared, and The Muses Among Us: Eloquent Listening and Other Pleasures of the Writer’s Craft. More about his music, writing, and films can be found at www.kim-stafford.com.