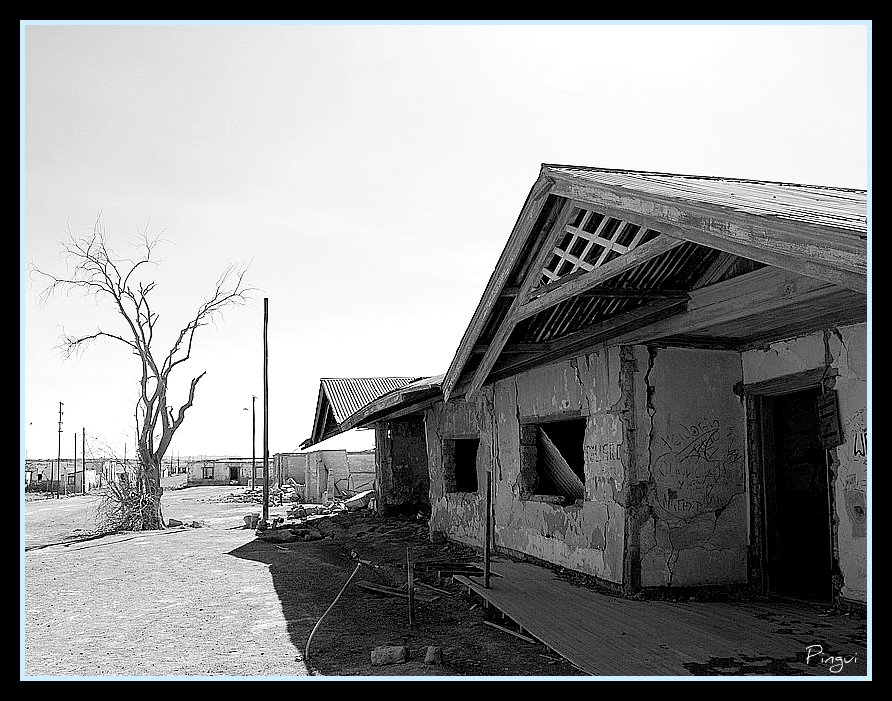 In Chacabuco in the open air,
the half-buried remains
of Pampinos, the nitrate men,
like geological layers swept by wind.

A land permeated with salt,
no insects, no animals, no birds.
Mummified remnants, blankets, and shoes.

Not pebbles washed up by the sea.
Not cairns to mark the way. Not stones thrown.
The fragments too white, too smooth,
too like thighbone, or arm.

A mother tries to find her son
by touch. It is her hand, not her voice
that calls out to him. The memory
in her fingers, plays like
a broken accordion.

There is no song here,
only the incessant wind.

An abandoned whitewashed
house, where the names on the walls
crumble, letters missing–
Rene Olivares, E… Pat… lli, Federico… Q… C
What is left, the cloudless
irrevocable descent of the sun.

A hand shovel
and endless salt.

It is said that in the desert you become
more silent than the silence around you,
then suddenly hear silence speak–

Night arrives like a door kicked in
wind full of bones and hair.
Nowhere to run.

Awake in the dark

stars light up, tens by hundreds
by thousands. The past beyond the past,
light of a billion bodies arriving.

To feel their gravitational pull,
secrets that have been travelling forever.
A light rain of names begins to fall.

Click here to read David Green on the origin of the poem.

For three days after watching this film by Patricio Guzman, I was silent, not inclined to be social. There was an incipient poem, but I was without words. I began by listening to the film over and over, transcribing in longhand, all the words of each woman who spoke in the film. My initial thought was to have their words be the poem. But a context was needed.

I studied the history of the Atacama desert, how it became the clandestine destination of the disappeared of Pinochet’s dictatorship, discovered Raul Zurita’s geoglyph and the exquisite story of how over time the wind deleted his words except one, “fear.”

What stayed with me was the image of Violeta Barrios, a garden trowel in one hand, turning to face the desert with her companeras, step by step, poring over the debris on the dirt and sand beneath them, finding one bone fragment at a time. The poem, in the end, felt like an offering, at least I wanted it to be. David Green
David Green is a clinician working in a community health center in Jamaica Plain, MA. He was raised in Venezuela. His previously published poems have appeared in the Lyric Review and the Bellevue Literary Review.