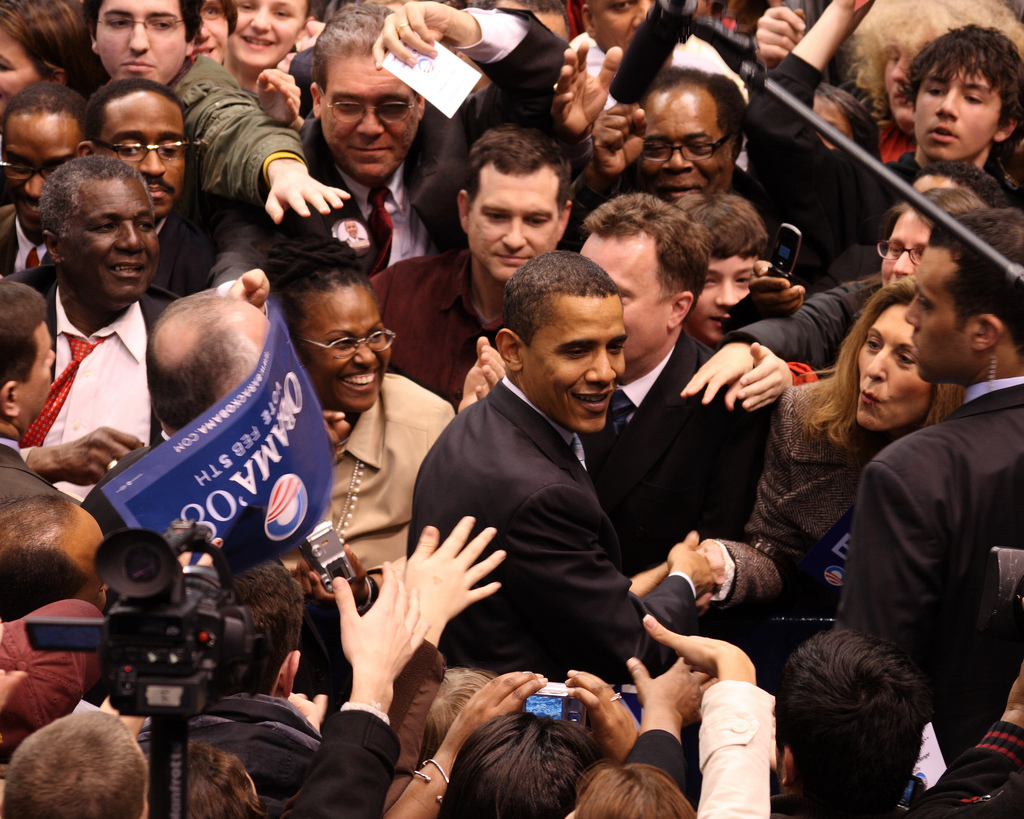 This article is being published in collaboration with the Kennedy School Review.

One day last fall, at a small campus in the heart of New England, I stood on an arena floor no more than 20 feet from the front of the stage on which Barack Obama would speak. Hundreds of people stood on the floor around me. Hundreds more were packed into the arena seats around the floor. The air buzzed with anticipation—all the more palpable since none of us knew if, in our lifetime, another such moment would happen. Not just us meeting the most powerful man in the world. But that this most powerful man in the world would be black.

This is a truth of American history: People whose skin and ancestry caused them to be considered black were once killed for attempting to vote. Before that, they were killed for trying to teach themselves to read and write. Before that, they were killed for daring to think themselves deserving of freedom. Underneath this truth of history persisted a vicious untruth: that these people were less intelligent, less capable, less worthy of respect. This lie is dying, but it is not dead. I know it lives because whenever a picture of me in my white coat is circulated on the Internet, I read comments from people who assume that I am a Harvard medical student only because I must have been selected over a more deserving student of another race.

All of these thoughts swirled through my head, rising along with the excitement of the moment. Shortly before the President emerged onstage, I noticed a college student standing just in front of me. His hair was like mine – cut close on the sides, long and curly on the top. Music was blaring, and his shoulders bounced with a recognizable rhythm suggesting that someone had taught him how to dougie. I wondered if this chance to see the President meant to him what it was beginning to mean to me. And then, when Obama was being introduced, I saw him turn with wide eyes to his two friends, also young men with curly tops and deep brown skin, and I saw all three of their faces awash in equal parts excitement and disbelief, and I knew.

For a few moments during the President’s speech I stopped listening to what he was saying and just looked at him, trying to fully grasp what I was seeing. Here was a man who for eight years had occupied the most powerful position in the known world, who had commanded respect from ordinary citizens and dignitaries and royalty – whether they wanted to respect him or not. Here was a man who had done a job that some had always assumed was beyond what people like him could do.

In that moment a reservoir of pride welled up within me at the thought that this president had stood defiantly against the noxious fiction of black inferiority. All those who had presumed blacks to be of inferior stock would be forced to gaze upon his brilliance and political success and accept that they were wrong. This, I felt, is the value of a black President.

But as that moment faded, and the last fall of his presidency came to its winter, I had to concede that President Obama’s tenure could not dismantle racist logic. Racism is impervious to facts; it is not based in reality and cannot be undone by it. It can cast a black President as a rare exception to an otherwise still-relevant rule. It can link our nation’s shortcomings to our President’s blackness. Just as some children born during Obama’s tenure have been taught that his achievements mean there is no limit to what black people can achieve, many others have been taught that America’s present struggles prove a black leader can never be entrusted to make America great.

And even the question of what it means to have been represented by a black President is further complicated by the way that he often presented black people to the world. President Obama always seemed more comfortable publicly criticizing the archetypal degenerate “Cousin Pookie” for failing to vote than he did criticizing Democratic politicians for failing to earn Cousin Pookie’s vote; more comfortable criticizing black mothers for feeding their children “cold Popeyes” for breakfast than criticizing a society that crushes so many black mothers under the weight of unthinkable poverty and then expects them to feed their children the balanced diet they can’t afford; more comfortable scolding black fathers for community breakdown than scolding the United States government for entrapping so many black people in conditions that demonstrably lead to poor social outcomes. Maybe he felt he needed to play this role. Perhaps he thought trafficking in well-worn tropes of black dysfunction helped reassure whomever needed reassuring that he did not intend to be the “president of black America.” Nonetheless, when he proclaimed that he would consider it a “personal insult” if black Americans did not turn out to vote for Hillary Clinton, I wondered whether he knew that some of those same people felt personally insulted by the way he’d talked about them.

Nor did Obama’s presidency address black people’s circumstances as it might have. Dramatic racial wealth disparities, perhaps the most important contributor to black stagnation, persisted largely unchanged. White families in the lowest income quintile have slightly more wealth than black families in the middle quintiles of the income distribution. Intergenerational wealth transfers are among the most significant determinants of familial wealth, and government policies have systematically denied many black families the opportunity to build intergenerational wealth for nearly all of this country’s existence. President Obama did not specifically address that history from the podium or through his policy.

Those Americans who lived through state-sponsored terrorism during the Civil Rights Movement wept openly at President Obama’s election. But his presidency did not realize the fullest promise of the Civil Rights Movement, which is to say that he did not speak the naked truth about America’s devastation of its black communities, a truth that Civil Rights Movement leaders relentlessly pressed upon the nation’s conscience. Of course, he never could have been that president. Such a president could only have been elected by an American people willing to entrust the authority of the federal government to someone intent on leveraging its power to repair the damages it has wrought upon black families for generations. Americans elected President Obama out of a genuine desire to prove themselves beyond the evils of racism, and then used his election as proof of our arrival at a mythical “post-racial” utopia while steadfastly denying any evidence to the contrary.

And yet, though my efforts to grapple with the value of feeling represented by this black President force me to acknowledge difficult realities, they inevitably lead me back to one basic truth: I know that I am proud of him. I am proud because I know that he’s weathered some of the vitriol he’s suffered for no reason other than that he is black. I often wonder if my country yet loves its black people, and by extension, whether it loves me. Sometimes I fear that the answer is no. This is at once terribly frightening and utterly exhausting. I know I am not alone in this. To think that President Obama has served this country with every ounce of his vigor while perhaps carrying that same fear is to know that he is endowed with fortitude far beyond my own.

I am also thankful for him, because he chose to associate with black people. History will always show that the first black president was a president who embraced black people. This was not a given and should not be taken for granted. His was the first White House that black Americans could visit and feel that they truly belonged. Barack Obama was the first president with whom I felt kinship, not because our skin was similarly colored but because we shared a culture. The President of the United States argued the merits of Drake and Kendrick Lamar the way I do, played pickup basketball with his friends the way I do, and professed his love to his partner with Al Green songs the way I do. Perhaps the simplest way to explain what it means to feel represented by him is to say that I saw myself in him.

The racist fiction of black inferiority has survived the existence of scores of exemplary black people, and it is not only non-black people who have proven susceptible to that toxic propaganda. It is near impossible to go through life hearing that people like you are less intelligent, less capable, and less deserving without that logic seeping into your consciousness. But for every day of my adult life, the leader of the free world has been a black man. It is not enough, then, to say that I saw myself in President Obama. Perhaps more importantly, I saw President Obama in me. Yhis has been the truest value of representation throughout his presidency: not to change the racist’s mind about me, but to change my mind about myself.

Representation alone cannot end black people’s suffering, but its power cannot be dismissed. I felt that power when I called out to President Obama from the crowd and he responded directly to me. I felt it again when he came down from the stage to greet the audience and shook my outstretched hand.

Most of all, I felt it in the moments just after he disappeared into the night. As I turned away from the stage, I saw the young man with the curly hair and bouncing shoulders. We hadn’t yet spoken to each other, but in that moment we knew each other as brothers born of shared experience. And so we hugged, in the way that black men often do: right hands clasped together and held tightly to our chests, left arms wrapped around each other’s shoulders, left hands balled into fists and pressed into each other’s backs. We hugged, two young men with kinky hair and skin that is so brown as to be considered black.

I said aloud, “We just saw the most powerful man in the world. And he was black.”