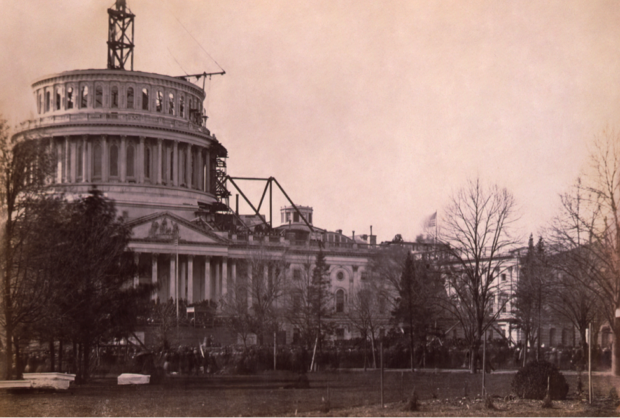 One of the first documentations of African people in British North America dates to 1619, when approximately 20 captives from present-day Angola disembarked at Jamestown. Slavery as an institution did not yet exist in Virginia, but it was widespread in practice. The form was the indentured servitude of some English colonists by the ruling elite. These indentured servants worked four to seven year terms, and could be bought, sold or traded. They could be mistreated, even killed, at will. And since the mortality rate in early Jamestown exceeded 50 percent, indentured servitude was a life sentence in most cases.

Historian Barbara Fields, in her foundational work “Slavery, Race and Ideology in the United States of America,” identifies the economic and social concerns that created the need for black settlers to been seen as a race apart. Improving mortality rates made lifelong enslavement a financially lucrative possibility. Furthermore, African settlers existed outside the common English cultural and social considerations that governed interactions between the classes. Colonial elites could subjugate Africans without fear of dampening further immigration and settlement.

Events soon took a turn that made racial difference an ideological imperative. In 1676, armed rebellion broke out in Virginia against the colonial government. White and black indentured servants joined arms together against the elite. Though the rebellion was crushed, officials recognized the danger posed by the disaffected. Through piecemeal efforts, the rights of African servants were curtailed. Slavery became a legal category separate from servitude. The law established that children born to enslaved women would also be enslaved. Intermarriage between black and white colonists was forbidden. And by the beginning of the 18th century the first slave codes in America were codified.

At the center of our national myth is the story of Plymouth Colony, Massachusetts, where English pilgrims and native tribes forged early alliances. In many history books, Thanksgiving is a tidy precursor to the American Revolution, which arose in the same colony and cements our vision of ourselves as fighters for freedom and lovers of liberty.

But despite the focus on Massachusetts, no state boasts a better claim to being America’s birthplace than Virginia. It was in Jamestown that leaders first made white supremacy a matter of public policy. Leaders in Virginia promulgated the racial caste system that softened class divisions and made possible the notion of an egalitarian, free white society. Virginians reconciled the notion of universal equality with the persistence of chattel slavery. And it was in Jamestown that the logic of white supremacy was hitched to global capitalism through plantation agriculture. Massachusetts birthed the revolution. But Virginia, mother of presidents, sired America.

And no place, having done so much to bring America into existence, did as much to threaten its demise in defense of white supremacy. Virginia’s entry into the Confederacy elevated the cause of secession to a contest for the nation’s soul, given the state’s strategic, economic and symbolic significance. Virginia served as the Confederacy’s capital and furnished many of its greatest military leaders. John Wilkes Booth, who assassinated Lincoln, is said to have screamed the state’s motto – “Sic semper tyrannis,” or “Thus always to tyrants” – before making his escape.

White supremacy, as both an organizing principle and foundational creed, has been an integral part of our history and identity. As Fields maintains:

During the revolutionary era, people who favored slavery and people who opposed it collaborated in identifying the racial incapacity of Afro-Americans as the explanation for enslavement. American racial ideology is as original an invention of the Founders as is the United States itself. Those holding liberty to be inalienable and holding Afro-Americans as slaves were bound to end by holding race to be a self-evident truth.

Of course, a house divided cannot stand. The paradox of unfreedom in the land of the free was ultimately resolved in bloody conflict. But the ideology of white racial superiority born of the paradox has remained with us, performing a similar function – the concealment of injustice in biological determinism.

The efficacy of white supremacy is never as apparent as when the concept itself is under threat. An obscure episode in Virginia history illustrates this truth.

In the 1880s, during the dying embers of Reconstruction, a biracial, populist movement briefly seized control of Virginia state politics. Led by a former Confederate general, the Readjuster Party was born in opposition to paying back the ruinous state debt incurred during the Civil War. Elites had voted for war, the Readjusters reasoned, and now the elite expected to be repaid for the cost. The party argued forcefully that state revenues should go to public education – crucially, they argued that this education should extend to all Virginians, black and white. The party gained power with considerable black support; 26 black state legislators caucused with the Readjusters or were elected on their party line. The Richmond Dispatch marveled that the Readjusters were “the first party organized in Virginia since the war which has broken color line.”

The ambitious program that the Readjusters began included “the repudiation of state debt, the abolition of the poll tax, extensive investments in public education that doubled the number of schools, teachers, and students, as well as the creation of Virginia State University,” the first fully state-supported university for black Americans.

A similar coalition, the Fusionists, would be formed across the border in North Carolina. Between 1894 and 1900, poor white farmers and black Republicans worked in tandem to elect joint candidates and implement favorable policies. Fusionist officeholders, a significant number of them black, liberalized access to the ballot box and increased taxes for education.

But just as quickly as it began, the cooperationist movement dwindled in the face of resurgent racial animosity. The banning of the whipping post and the high visibility of black faces in state government provoked backlash. In 1883, a race riot left five dead in Danville, Virginia. The riot gave ammunition to conservative defenders of the old order, and their preferred candidates swept the legislature. The Readjusters were soon a distant memory. In North Carolina, a constitutional amendment to limit black citizens’ access to the ballot passed in 1900, ending the Fusionist movement.

There were further populist uprisings in the South throughout the 1890s, led by men like “Pitchfork Ben” Tillman, that represented the class interests of poor white Americans. But these movements either ignored the racism of the time or used it as a wedge. In the end, the missed opportunity for solidarity was to the benefit of the old elites, who eventually reasserted their authority.

The election of Donald Trump, a demagogue riding populist anger and nativist fears, has historical precedence. He is the latest in a long line of opportunists – from Strom Thurmond and Louise Day Hicks to Joe Arapaio and Steve King – to spin white ressentiment into electoral gold.

Yet Trump’s antecedents do little to lessen the shock of his ascension to the Oval Office through foreign manipulation and suppression of the vote. Many are grieving today because their belief in their country has been shattered.

Americans are an ahistorical people. This trait has fueled our disdain for the storied pomp of ancient lands, made us a magnet for those seeking to escape the constraints of the past, and established us as a mecca for innovation and reinvention. It has also blinded us to the realities of our nature as a people; caused us to see crisis where we should see continuity; encouraged us to prefer the cozy familiarity of national myth to the starkness of truth.

Many believed that the fact of President Obama would be enough to transcend our bitter history. The fact of President Trump now serves as a grotesque correction, but we should resist the urge to over-correct. Progress is not inevitable, but then neither is retrenchment.

The grim (or hopeful) reality is that we live in the country we have always lived in, and we continue to be ourselves, for better and worse. Throughout our history, some Americans have sought to dominate and rule through fear and hatred. Other Americans have fought back, have insisted on the bedrock decency of our values, have dreamt what never was and willed it into being. There will be no escaping the long arm of white supremacy, but resistance is just as vital a part of our birthright.

At even the lowest point of our history, as the promise of Reconstruction congealed into Jim Crow, former slaves and former Confederate soldiers built political power together in service of a shared agenda. It was not because the erstwhile rebels had purged their individual hearts of prejudice; and indeed, the moment was short-lived. It was because, like the Pennsylvania couple in 2008 who “voted for the nigger,” the hope of solidarity outweighed the psychic comfort of imagined superiority.

It was because Americans of goodwill and long perspective were willing to continue organizing and fighting for our values despite the vagaries of the political climate and an atmosphere of despair. Our challenge is to be like those Americans — to be unyielding in defense of our progress, yet gentle with one another. To bear the burden of a long, twilight struggle against the disease of racism in the heart of our body politic. To confront the contradictions of Whitman’s multitudes in the service of true freedom.

Published in collaboration with the Harvard Kennedy School Review

Sebastian Johnson is a contributor to Pangyrus Literary Magazine, whose writing has also been featured in The Washington Post and The Los Angeles Times. In 2016, he gave a TEDxMidAtlantic talk titled "The Case for Basic Income." Sebastian is a graduate of Georgetown University and the Harvard Kennedy School of Government.