Last weekend as Harvard prepared to take on Yale for Ivy League football bragging rights, a “Yale cites Wikipedia” poster flashed on College GameDay. The implication of this ultimate academic insult, delivered for the all the nation’s football fans to see?  That Yale students were intellectually substandard, lazy, and ill-informed. 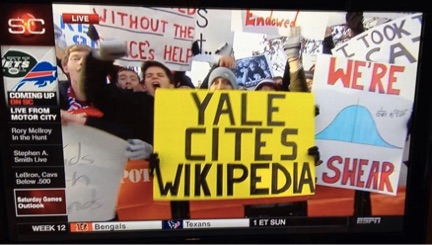 My 10th grade social studies teacher might have agreed.  Wikipedia was not an acceptable source for our papers, he instructed us.  Sure, use it to get background information or look for other sources, but Wikipedia itself was not to be cited.

So I was surprised when, in a classroom at Harvard where I’m currently a student at the Kennedy School of Government, our professor delivered a more current, and nearly opposite, message about Wikipedia. His message: If you work on a particular issue, whether related to education, the environment, or immigration, you better care a lot about the content on its Wikipedia page.

Admittedly, there is nothing particularly exciting or engaging about a Wikipedia article on an issue like the Pre-K or Pell Grants. It is black and white. It has a few subheadings. There are usually not a lot of images aside from bland, hard-to-understand graphs or tables.

But here’s the thing:  everyone consults Wikipedia.  It’s one of the most read resources on any given topic.   To this day, the most viewed content I’ve ever written is probably the 3,000 dry, factual words I submitted on Wikipedia’s remedial education page. And yet, before making my contribution, I barely thought about the implications: that, given Wikipedia’s popularity, this was not secondary to other sources of information, or beside the point, or off the record.  This was, for nearly any reader but the most expert insider, the record.

Conservative or liberal, national or state-level, organizations across the country spend a large amount of their time and resources working to better advance their perspective on critical issues facing America’s students. They create infographics, attend trainings on social media, and hire communications specialists with the hope that more members of the public and elected officials will better understand and support their recommendations.  I myself spent three years as a policy analyst in Mississippi writing about ways to improve our higher education systems. I wrote reports, fact sheets, and blog posts.

But when I Google “remedial education,” those resources are nowhere to be found. The result a curious person would see is, you guessed it, the remedial education page on Wikipedia that neither I nor my organization spent any time thinking about, and that I contributed to only months after leaving my job.  The logic of Google is unstoppable:  results at the top of a search page get clicked and viewed more often.  And at the top of the search page is Wikipedia.

In fact, even though remedial education has not been a particularly hot topic for the average American, over 50,000 page views have been recorded since I contributed to the topic’s Wikipedia page —vastly more views than will ever reach my obscure fact sheet on my previous organization’s website.

Take a topic more present in the public debate and the number balloons. The charter school page on Wikipedia has been viewed more than 76,000 times in just the last ninety days.  The page for the Affordable Care Act, over the same period? 230,000.

With viewership at that level, it becomes obvious pretty quickly that we should all care about the content and format of information on any given topic’s Wikipedia page.

My Kennedy School professor was not alone in understanding Wikipedia’s significance. In September of 2013, The New York Times reported that the University of California, San Francisco (UCSF) had begun awarding course credit for Wikipedia editing. Medical school students at UCSF are awarded credit for editing pages on diseases that the school then helps to distribute across the globe.

“If we want to get high-quality information to all the world’s population, Wikipedia is not just a viable option, but the only viable option,” says Dr. Amin Azzam, an associate clinical professor at UCSF’s School of Medicine told the New York Times.

I’m not encouraging all advocates or administrators to go to the page of their issue en masse and paste in the text of their latest fact sheet. Wikipedia has rules for the content of each page, the most important of which is that information provided must be neutral and verifiable. But that shouldn’t stop us from making sure information is relevant, accurate, and accessible for people seeking information. There are lots of pages that would benefit from reorganization and contributions from strong writers with solid knowledge.

Ivy League football fans may joke about the quality of Wikipedia, and high school students may not be allowed to cite your work, but these days they’ll find themselves increasingly in the minority. Meanwhile, if we really care about the information the public and public officials take in on education issues, we should be monitoring, editing, and adding to Wikipedia pages far more frequently.

Sarah Allin
Sarah Allin is a Masters in Public Policy candidate at the Harvard Kennedy School of Government. Prior to the Kennedy School, Sarah was a senior policy analyst at the Mississippi Economic Policy Center in Jackson, Mississippi. She now lives in Somerville, MA with her husband, Tom, and adorable standard poodle, Charlie.
Latest posts by Sarah Allin (see all)