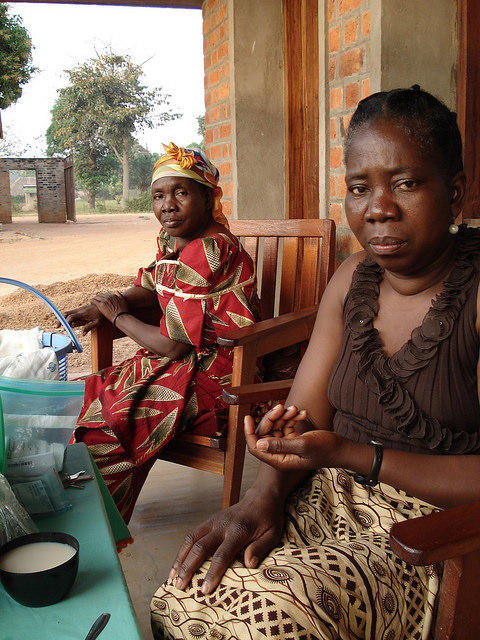 Congo: the Story of One Family’s Endurance

An excerpt from Mama Koko and the 100 Gunmen

Out of our puttering five-seater charter plane, Francisca and I looked down eight thousand or so feet to Congo below. Above the land leading to Dungu, vast blankets of the Congo basin forest stretched to the horizon in all directions, rivers slicing through, catching the sunlight. The canopy was too thick to see through, leaving what was beneath entirely to the imagination, aside from a couple of mining towns and tiny settlements on remote bends in the river.

It had been a year of bad news since the day Francisca got the first call from home, the day after Kony’s attacks started. She was tired, distracted, spending almost every night up, trying to get through to her family for news, unhinged by the media reports intermittently firing across the international wires, mixed with static-marred cell phone calls from home. Sometimes she could talk for a minute or two before the line cut out. Sometimes, in the middle of the night, after she had finally gotten to sleep, her phone would ring and, panicked, she’d jump out of bed and run to answer it, her hands shaking so much that she fumbled when she tried to pick up, hitting the wrong buttons.

Occasionally, Francisca’s calls made it through to her brothers or Mama Koko, when they weren’t spending months at a time hiding in the bush. No one had died the day she heard gunshots and the line went dead, but that was little consolation. Every call yielded broken, hasty reports of gunmen and cousins, nieces, nephews, and more cousins killed, abducted, burned alive on Christmas Day.

On the ground in Dungu, after Francisca’s long embraces with her dear ones, we drove across Dungu to Mama Koko’s place. It was a one-story road-front cement house, dripping with bright orange climbers. It stood just one block from the Dungu Bridge, the gateway to the Bamokandi neighborhood, which was the site of the in-town attack and LRA sighting earlier that day. 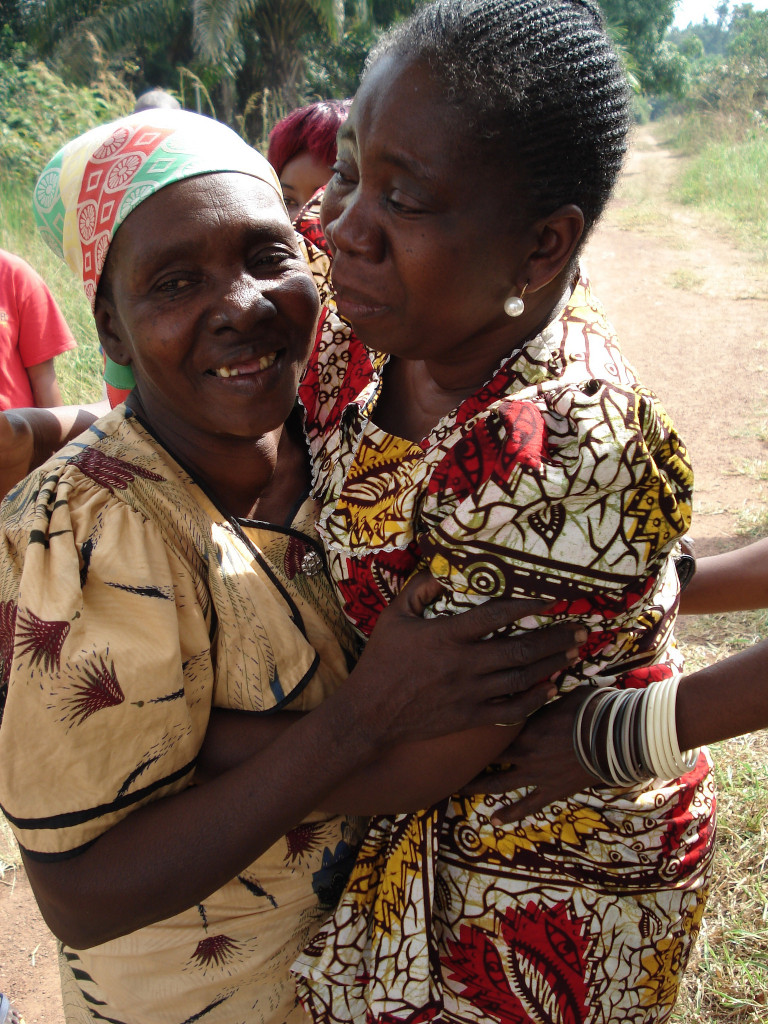 André and Bernadette had bought the land more than half a century before, but long gone were their shop’s shelves of household goods and cases of beer. The land was now only half hers, and not by choice. It sat right on the main junction, next to a roundabout crowned with a statue of a native warrior, marking the fork in two roads heading north. Because of the house’s strategic position on the road and its strong cement walls, the Congolese army kicked the family out when it suited them, and of late, that was often. The family had moved back in only four days before our arrival.

But it was a welcome feast among ruins. Devastation hung in the air, like the gunshots everyone heard earlier that day. The children crowded around us, watching keenly as we ate the elaborate spread, mamas chastising them to stand back. The children ate only one meal a day, and this wasn’t it.

Everything had changed. All of the treasured household items were stolen when the Congolese army took over. Mama Koko stashed their remaining good dishes and furniture with friends on the other side of town. She didn’t replace them. She didn’t keep anything nice anymore. She knew they would be taken, again.

After we ate, we resettled into the backyard yapu, a large open-air hut made of palm leaves and adobe, furnished with traditional woven lounge chairs and wooden coffee tables. This was the real living room on the property, where kids played, women cooked, and guests were welcomed.

André’s grave sat off to the side, with a couple of other family tombs, large coffin-shaped cement blocks graced with rainbow pinwheels and the wires of decapitated plastic flowers cemented into cans in place of a headstone. Francisca had brought these love-gifts from America to honor the family members who died when she was so far away, but the plastic flowers had long ago been lifted by grave robbers. Only the rainbow pinwheels remained, spinning cheerfully in the breeze.

The rest of the sprawling property, well over an acre in size, was dotted with traditional adobe huts for family and squatters. Mama Koko lived in the back in a traditional hut, not in the cement house.

In the yapu, family gathered in a loose circle and small talk lurched along—how big the children had grown, the new babies born—and soon Mama Koko and the rest were hungry to share, their minds and tongues fixed on the in-town massacre only days before. Francisca stalled, asking after neighbors and old friends. She had always avoided blood and gore: When she was a kid, she wouldn’t kill a goat or hen like her brothers and sisters did. Back in Portland, Kevin always came home from the video store with his and hers movies: an action flick for himself and a smooth comedy for Francisca. While he watched his shoot-ups, she roamed the house in self-imposed exile. She couldn’t look at that stuff. She knew they were only movies, but she cried every time someone was killed. 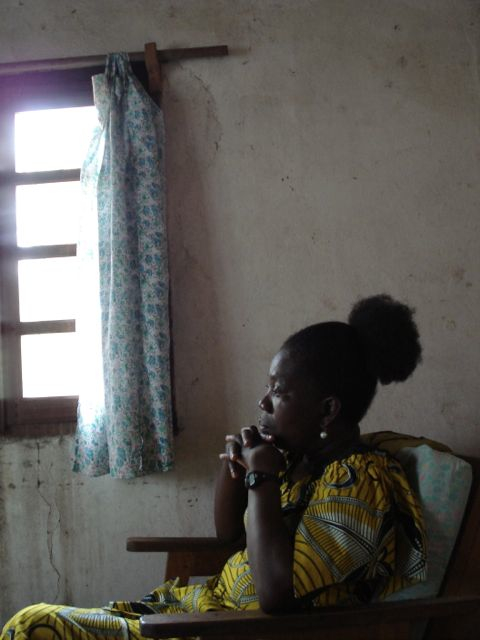 That first afternoon in Dungu, the family wanted to talk. Some sat close to Francisca and held her hand. Francisca wasn’t ready. She didn’t want to know the details yet, what had been stolen, what they’d never get back, as if putting off the full report could make it less real. She wanted home to still be home.

It was easier for her to steer the conversation toward me, the guest. In the United States, we often lead with the question What do you do? In Congo, they lead with  Who is your family? In my case, they asked: Was I married? Did I have children?

Francisca answered on my behalf: “Someone just wrote about Lisa in a big newspaper in the US,” she said, referring to an article that Nicholas Kristof had written in the New York Times about my complete life makeover and sudden foray into activism for the Congo.  “She was engaged, but she had to choose between her fiancé and Congo. She chose Congo.”

The family was quiet for a moment, processing this oddity. Then her cousin declared, “So it is like that you are a Congolese woman!”

But we couldn’t stop the current. Everyone else—the extended family packed into the family yapu—jumped in to share bits about the in-town attack down the road just days before.

The day of the attack, a few children were collecting water after school, at the community faucet in plastic jugs. They spotted men in long coats with guns. LRA. The children ran. The gunmen followed and started shooting. A bullet hit a father carrying his three-year-old. It flew through his arm and pierced his daughter’s stomach, blowing her intestines out the other side.

They shot a young woman running with her one-year-old baby boy, ripping apart her genitalia. She collapsed. Grasping the baby, she dragged herself on her back into the bushes to hide.

The United Nations didn’t send scouts that night to look for survivors, even though they were only a few miles up the road and it wasn’t even dark yet when the attack happened. No Congolese army patrols, either.

In the morning, a neighbor followed the bloody trail to the bushes, where they found her dead body. She had bled out during the night.

Her baby was cradled in her lifeless arms, still nursing.

Francisca’s mind was racing as brothers and cousins jumped in, talking over each other in a chorus of details.

I asked the family if they knew the mother and baby.

Yes. Francisca’s eyes widened when she heard the name.

It was Antoinette, Francisca’s cousin.

Lisa Shannon
Lisa Shannon is a human rights activist and author of Mama Koko and the Hundred Gunmen: An Ordinary Family's Extraordinary Tale of Love, Loss, and Survival in Congo, and A Thousand Sisters: My Journey Into the Worst Place on Earth to Be a Woman.

Lisa Shannon is a human rights activist and author of Mama Koko and the Hundred Gunmen: An Ordinary Family's Extraordinary Tale of Love, Loss, and Survival in Congo, and A Thousand Sisters: My Journey Into the Worst Place on Earth to Be a Woman.