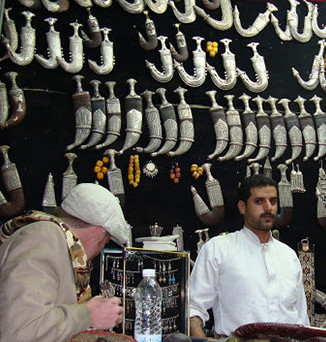 It’s Thursday in Old Sana’a, and the call to prayer has yet to rush anyone home.

Our motley tourist troupe – Egyptian, Brazilian, Canadian, American – sits in the corner of a silversmith’s shop in Yemen’s capital watching the afternoon street exchange. It’s a spur-of-the-moment trip from Dubai, born of cheap tickets on Air Arabia between weekends of heavy tribal fighting. 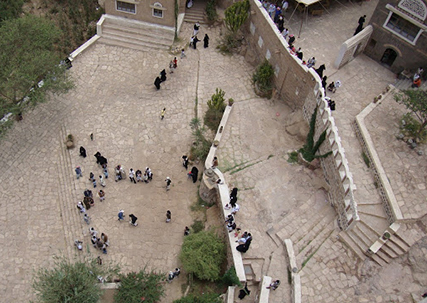 Then as now, stability is tenuous. The Houthi rebellion in the north threatens an already fractured state; Al Qa’eda roosts once again in the Hadramaut Valley; there is scant water; oil, even less; the president has, once again, resigned. Yemen: climbing the Failed States Index since 2005.

But like so many states in the region, fragility depends on the day. On this afternoon in June, the city’s rhythm beats as slow and sonorous as the call of the azan from Jami’ Kabeer mosque. The acacia trees are in bloom; the mountains bring a dry wind; people get on with the business of living.

There are beggars – darkened by the sun, gaunt – who roam past us ahead of afternoon prayer. Yemen is not a rich country by any stretch, but there’s a dance to which everyone is accustomed: a few words murmured by the beseeching in return for the sturdy clink of rials into outstretched palms. The small hands that gather around us – accompanied by bare feet and curious eyes – poke and prod the strange people with their cameras, their sunglasses, their uncovered arms, the women with no hijab who dress in colors.

Aaliya is 12 and wears a somber black abaya; her younger cousins are in soiled party dresses and T-shirts. I ask Yehya, our guide, how soon the pink dresses and curls will disappear under black cloth and gloves. “When they become women,” he declares. (Later on, a girl in niqab, slightly cross-eyed, will sidle up to me, restrained but assiduous in her begging. She will trail us for blocks before I give her money, and when I look at the cloth around her eyes, I see that it’s worn, and her dress is scuffed white with sand at the bottom. Will she be here in 10 years – on the same street, peddling for change, or married, loosed from this routine, these confines?) 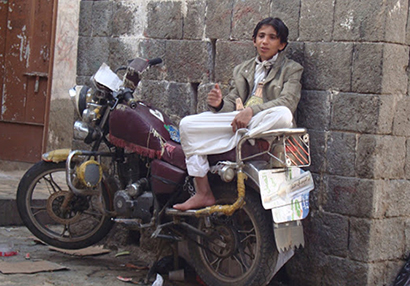 Two boys, large, curved jambiya knives jutting from their belts to display manhood, straddle an abandoned motorcycle behind a brick building. (The curved daggers passed down from fathers to sons are legacies wrought out of metal: wealth, status, and region woven into silver inlays, carved into hilts, and bound by intricately patterned belts. The ones I buy have Islamic and Jewish metalwork woven into the design; testament to the craftsmanship of Yemenite Jews whose wares haunt the souqs decades after their emigration).

“Houm majaneen!” one of them says derisively of the large African family that begs in front of the shop – they’re crazy. He is reproached and told to drink his tea. (Later, another beggar boy wanders up, maybe 7, 8, dressed in a large blazer and trousers, dragged reluctantly by his grandfather through the square. The lucid hazel of his eyes strikes me, as if I can see right through them to the resignation of another week, another hustle.) 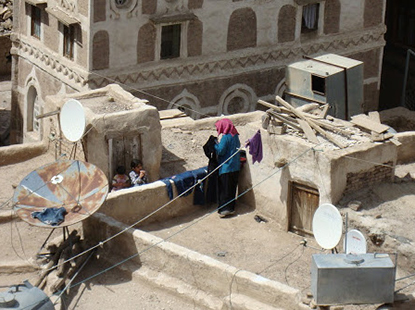 If Egypt is um dunya – the mother of the world – Yemen is its forgotten grandfather. Its rich legacy as a crossroads of trade and a progenitor of culture in the Arabia Peninsula is eclipsed by its modern woes. Oil-deprived, water-scarce and enervated by qat, it moves at the same viscous pace as the honey it is famed for, a timestamp of a bygone era before the rest of the region discovered oil. Before the black gold rush hit Dubai, before Muscat got the Shangri-La, before Riyadh got its first Starbucks, there was Yemen: impoverished, fragmented, volatile Yemen – a modern testament of what could have been had the rest of the Gulf lost God’s resource lottery.

In spite of – maybe because of – what it lacks, Yemen remains culturally stable in ways modern parts of the Gulf haven’t. Open stalls line the narrow streets of the Souq al Milh and the shops around Bab al Yemen. (In the UAE, malls have become the modern-day agoras; places of ultra-cool congress that erase the backwardness of haggling in the outdoors.) There is gossip and tea and gregarious laughter as the Egyptian barters for me in the crisp outdoor air, chastising me for giving in too early. (When I go back to the U.A.E., where I work as a journalist, the air will be hot and thick and impenetrably dense with sand. Industrial air-conditioners will spew cold into the malls where society congregates, and a slalom run down Ski Dubai will seem normal – an average day in the desert.) 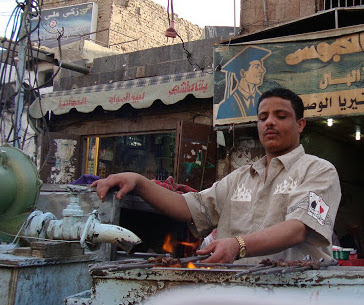 We eat kebabs roasted over a cleft oil drum in the souq. Our place mats are copies of The National, the Abu Dhabi-based newspaper that employs me. When it was first launched in 2008, it was touted as “The New York Times of the Middle East.” Behind me, a shoe seller opens a copy, sprays it down, and wipes his shop windows.

As we eat, the boys and men around us – there are mostly only boys and men around now – crowd the stalls, grabbing for hot sauce, eggs and ketchup to shove into freshly baked rolls. They peer at us for a while; one man offers me a fresh roll with blackened fingers. Soon, our novelty wears off. We’re abandoned. (Later, as a friend and I sit in a female hamam, the water tepid and doled out in empty vegetable cans, an Egyptian wife will tell us that men now go to her country for brides, because Yemeni women are circumcised and “not hot-blooded”. The henna patterns on her thighs are intricate and vast, spanning the large swaths of her body.) 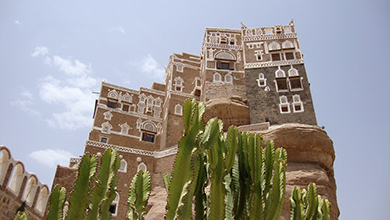 When we tour the old summer residence of Imam Yehya in Wadi Dhahr later that day, another woman – covered in black, glasses tucked into her face covering – raises her gloved hand and makes a clicking gesture. “Mumkin asoor?”

Sure, I’ll take a picture. We pose: black robe, black robe, black robe, me (pink shirt and white scarf), giggling children. Not a face in sight, but I’m the unknown quantity in the equation. It’s amusing, and strange. Have I seen you at the hamam? I want to ask. Were you the Egyptian wife with the frisky husband? More families now. More cell phones, more clicks, more smiles. Babies are suddenly in my arms, bright green eyes questioning. The other American – ginger-haired, wad of qat in his mouth large as a baseball – is stunningly pale next to their coffee skin. We are the subjects become objects; the animated souvenirs come to entertain the local folk on a Friday afternoon.

When I first came to the Gulf as a recent American college grad, I was drawn by a narrative of progress and modernity. The deft cut of the Burj al Arab and the gild of Emirates Palace painted a seductive vision: oil was the new gold rush, raising future cities from the sand, rife with potential and opportunity to create something new, something better, something different. But as I took in Yemen – poor, broken, no-ski-slopes-for-miles Yemen – I couldn’t help but wonder about what development throws away, what jewels of the past get lost in the race to re-make a nation. 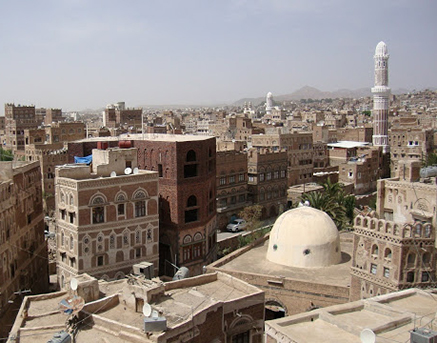 I sleep with an open window, six megaphones lashed to the minaret that looms over my room. At dawn, the over-zealous muezzin bellows “Allahu Akbar!” so loudly that my bedframe shakes and I flail, falling out of bed.

Below, the devout file into the mosque. Religion, if nothing else, offers certainty in an unstable clime, ritual and routine creating a fixed environment where outcomes are knowable, the playing field safe. I wonder if that is why Old Sana’a clings to these traditions; that in the face of unemployment and scarcity, religion makes the uncertainties easier to bear. In Arabia Felix, where things constantly seem on the brink, hope seems the most precious of resources to cultivate.

The day we leave, the Houthi rebellion starts anew; refugees stream in from the northwestern province of Hajjah; and a German family of six is kidnapped and executed. More travel warnings spew from the American embassy: avoid Yemen at all costs; avoid the poverty, the instability, the devalued cost of life.

So we leave, and I return to my tactless and air-conditioned petro-kingdom; to a throng of Indian migrant workers crowding the arrivals terminal; to a skyscraper apartment that does not sit on a lake but a sandpit filled with water; to late-night conversations in sleek lounges around cloying shisha smoke. I feel the pulse of the city’s potential thrum through my car as I barrel down its 7-lane highway, jambiyas and honey and silver tucked into the back.