In a time when images of violence and suffering fill our brightly lit devices, contemporary poetry is also reflecting a graphic experience of unease. Fish Carcass by Vi Khi Nao and Big Gorgeous Jazz Machine by Nick Francis Potter notably join drawings with unsettled, emotional verse of fatigue and rupture. While I wouldn’t expect poetry released this year to be brimming with carefree optimism, these collections, while woeful, offer nuance and delicacy.

In Nao’s Fish Carcass, the overwhelming specters of trauma and agony have a direct tie to what is commonplace. As in her previous writing, she frequently animates food in all of its ingredient nature — suicide and destruction familiar neighbors to rosemary and garlic, rice and carrots. Nao’s work inverses the assumed. A meal becomes pulled apart, not quite congealing, made meticulously strange. Eating is both joyously embraced and uneasy in its preoccupation. In the poem, “Bernard Louiseau is Dead,” about the suicide of the famous chef, death is described as not being “so sirloin.” Pain appears as the backdrop to expression and words, rather than gardens of earthly delights. The daily habit of eating is investigated down to its building blocks, whereas torment is not held under the microscope with as much ease.

In Nao’s drawings, fish and household items — scissors, a water jug, electrical sockets — replace or merge with body parts on female forms. Whether or not these objects are there to be consumed or integrated into the anatomy is up to the reader. There is a unifying wholeness from the spontaneous nature of Nao’s writing and the way she expresses non-human agency. In “Coital Exposure,” genitals are compared to spring rolls and squid; in “Seismic Sea Wave,” there is the rouge-red image of giving birth to frozen strawberries. This written relationship to the inanimate shows how disparate these forces are, and the summit-like discrepancies in the distribution of power between them. Despite this, embodiment is on offer even when it isn’t felt.

Or perhaps that is the crisis and how easily something like a power cord comes to replace a leg. If the sensation of embodiment is always perceived, that makes injustice and assault all the more confrontational. When the world is assumed to be consumable — strawberries and their pickers known to have unequal footing to the wealthy and their pampered pets — disparity tends to shout out to those who choose not to believe it is the natural order to things. References to those who are victimized and endure continue to increase in volume as the pages go on. In the particularly skillful poem, “My Ears,” Nao writes, “The corridor between me / And the world / From within / The largest outdoor prison system,” in verses that may reference its prison system or the United States itself. In “United,” we get a list of women who spoke out about sexual violence done to them, whereas the accused perpetrators are gathered under the heading “States.” This listing convention is mirrored towards the end in “My Existence,” where suicide attempts count up to 32. Nao seems to ask: just how much harrowing cruelty must be endured before release is achieved?

This bloodletting is both literal and metaphorical, just as Nao’s heart and health is by extension, connected to it all — everything bonded by a pulse of feeling. In this electrocardiographic mapping of lived experiences, the poems portray the tether to life itself as a heightened experience, both uncanny and horrifying. However, Fish Carcass’ potent angle into the shock of terror never negates the fact that love is still there. In fact, it’s this specter of love that makes violence even more of a threat.

From its playful opening take on Goethe and Bachelard’s words, Nick Francis Potter’s Big Gorgeous Jazz Machine asks readers to approach the following frames not as static nor its words as concrete, but to view the work in terms of movement and melody. This direction puts the juxtaposition between themes of activity and inertia into stark relief, especially in segments where variance is slight. The torpor of Beckett’s narrations is brought to mind, where subtle twists of phrase such as “I can’t go on, I’ll go on,” make all the difference.

Some of the book’s most extreme events occur in its memorable second section, “Vacationing,” as a man on fire disrupts a woman’s vacation, questioning not only the callousness of crowds but our inability to escape crisis. Read as an interrogation of avoidance, the ambiguity of bystander inaction leaves me wondering whether they are too fatigued to deal with the spectacle of suffering, or rather, too cold to care. This motif of inquiry on the confusion over responsibilities — what we owe others and are owed — is a tall peak that looms over the entire collection.

In the twin sections, “Some Notes on Domestic Phenomena” and “Some Notes on Domestic Objects,” household chores melt into fragmented swirls of organic vibrancy, making the mundane recognizable even as it whirlpools the brain with its tedium. Potter deftly handles everyday cliché, validating daily decisions as the bedrock of our most intimate experiences, while graphically rendering them almost incomprehensible and ghostly. The personal becomes impersonal as familiar happenings reveal themselves as universal, collective habits. “I love you but I’m tired” is written below two panels featuring praying hands and closed eyelids. While it reads on the page as a response “Regarding My Children,” the sentiment is just as appropriate for so many of the topics scattered throughout the collection.

Ideas of distance and identification spin out into the larger societal realm in “Ambient Day Labor.” What starts as psychic fracturing in the domain of the home becomes a full-on collapse when conceptualized through infrastructure. Potter’s use of stenciled lettering here is an adept aesthetic choice. Throughout the book, this tension of the personal and the standardized, the legible and the illegible, play tug-of-war. The words sink and break apart in the amorphous colored washes that simultaneously veil and swallow them. Whereas in some sections, such as “Alvin Dillinger’s Brother,” the handwritten fonts create a much more intimate scale and individual feel, in others, like “Imaginary Houses,” the homogenized, replicated lettering puts distance between the singular and the mass-produced.

This largeness of scale continues in “After the President” and “After the Animals,” where ruin is skillfully portrayed not just as sorrowful but downright bizarre. Some people are noticed to be non-human creatures; some want to mask themselves as animals as well. Destruction is rendered not just as process but as a shift in perspective. In “After the Animals,” the landscapes are presented as grand vistas before immediately being broken down into their mineral, animal, and vegetal components, in comic form. Smaller panels become microscope slides that investigate the elemental nature of what has been. In this light, I read Big Gorgeous Jazz Machine not simply as a product of Potter’s original act of creation, but as a postmortem exploring the pain of passing away.

Potter’s gestures to things igniting, melting, and imploding, carry through with the idea that when rupture happens consistently, emergency becomes habit rather than climax. When internal labors reign supreme during such overwhelming sameness, it becomes crucial to document not only what happens outwardly but also what is felt. Emotion narrates the view, just as relationships point us in which direction we should look.

These two collections are apt articulations of our current era of exhaustion, where text and images cycle into prominence just as quickly as they tumble out. Lyric artifacts such as this, one hopes, will outlast the wildfire or the tsunami long after the last iceberg’s crack. You may not be able to vacation carefree while reading Big Gorgeous Jazz Machine or hold down your basil seed drink when reading Fish Carcass, but you’ll encounter the poetically beautiful throughout both of their confrontations.

Image: Cover of both poetry books, licensed under Fair Use Law. 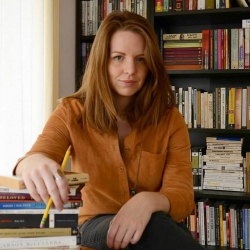 Laura Paul
Laura Paul's writing has been published in The Brooklyn Rail, LA Review of Books, The Comics Journal, Dream Pop Journal, FIVE:2:ONE, Hush: A Journal of Noise, and Heavy Feather Review. Connect with her on Twitter and Instagram @laura_n_paul or her website laurapaulwriter.com.