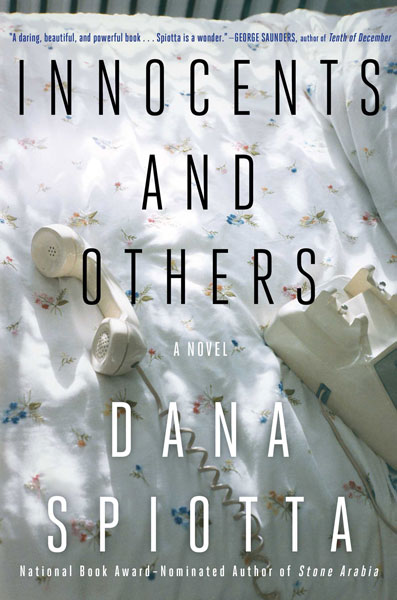 In much of her fiction, Dana Spiotta has focused on relationships among friends and family, with their frustrations, recriminations and nearly incurable optimisms. In her current novel, Innocents and Others, she continues this exploration, the complexity of the characters fleshing out a book whose unfolding-of-life plot intertwines language and contemporary culture in a way few writers outside Joan Didion or one of Spiotta’s mentors, Don DeLillo, could have pulled off.

Meadow Mori is a successful documentary filmmaker who grew up wealthy in Bel-Air, the daughter of an entertainment lawyer, and attended Wake School, an exclusive private arts high school. The story begins with a flashback to her senior year in 1984, where she and her “boyfriend”— an over-the-hill filmmaker who strongly resembles Orson Welles —spend most of their evenings in his Santa Monica home’s bedroom. “Remember, this is a love story,” Meadow reassures us. The senior project she chose was an homage to him and what he’d mentioned was his favorite film, Orson Welles’s City Lights; she watched it twenty times in three days. When she told him what she had done, he changed his story: it wasn’t City Lights he’d watched over and over. “I believe,” he says, “I said I had watched Stagecoach.” (Welles, famously, declared the John Ford film a perfect “textbook” he’d watched 40 times to teach himself movie making).

After Meadow presses him on the issue ─ “You were lying about all of it anyway, right?” ─ he replies, “I don’t think of it as lying. I think of it as a little story I told about me, or what people want to think about me.” This Wellesian play on truth, and Meadow’s admiration for the way (the real life) Welles blurs the line between authenticity and fraud in projects such as F is for Fake, become key to her own oevre as she develops into a filmmaker. Her documentaries spring from her own insecurities and relationships, employing representational tactics that win critical praise but cause considerable angst to her subjects. The criticism she provokes in those subjects and in her audiences tempers her successes in emotionally wrenching ways. Ultimately, when catastrophe strikes late in the book, Meadow Mori’s more superficial qualities bring her to a “Memento” Mori—after which she must resurrect her life and art along different lines.

Meadow’s childhood friend, Carrie Wexler, appreciates and understands more than anyone Meadow’s affection for Welles’ art and how profoundly that influences everything about her life:

In a sense, she is the lover of Welles. Welles the great confidence artist, the prevaricator, the big fake who tells you he is manipulating you and that makes the magic all the more magical. Sleight of hand, she is all of that. She would say film is an art form built on an illusion … All of it is a magic trick to Meadow, and that is part of what makes it so miraculous and beautiful: it isn’t real life.

Carrie herself attends Wake on a scholarship, and lives in her mother’s far less lavish rented home in nearby Santa Monica. Steeped in TV sitcoms, Mad magazine and other cultural touchstones of the late 1970s (“the children of TV and Tab”), the two friends share a keen interest in movies, creating their own “little films”. Carrie is self-conscious about just about everything—at one point half-jokingly calling herself “fat and poor” to Meadow’s amusement, while at the same time exulting in Meadow’s “sleek sex kitten,” cool-kid bearing, the European and art-house films Meadow introduces her to, the aroma of cigarette smoke trailing behind her.

Later, the two go to film camp together and eventually make the cross-country trek to NYU’s Tisch School to study filmmaking. In keeping with what will become a familiar pattern in her life, Meadow leaves after one year to join a film collective in an abandoned factory building in upstate New York’s Gloversville. Spiotta, a professor of English at Syracuse University, is on familiar ground here, vividly and hauntingly describing the region’s empty storefronts and desperate residents, and such landmarks as the decrepit art deco Glove Theater, as Meadow incisively commits it all to film in the manner of a Warhol interview. The films Meadow creates are emotionally dark, utilizing a single camera, with stark production values—gripping in their raw and brutal simplicity. But for all her accumulating awards and material rewards, her relationships and unfinished projects are careening, untethered and increasingly taking their toll on her.

Meadow’s emotional collapse finally occurs while filming a documentary about a woman, Sarah Mills, imprisoned for over twenty years in Westchester County following a trumped-up conviction for arson that killed her infant daughter. During the filming, as they approach the details of the daughter’s death, Meadow breaks down and rushes from the prison—emotionally drained—and abandons the project. Reflecting on this, her failed relationships with a series of ex-boyfriends , and a trail of unfulfilling, controversial and unrealized projects, she concludes her self-centered outlook must quickly and positively change. The efforts she makes to recapture her elusive promise are critical to the plot’s denouement.

As opposed to Meadow’s decidedly non-linear track to professional attainment, Carrie’s career and personal paths seem comparatively organized and conventional. Crediting Meadow for encouraging her to make films, Carrie sees her work eventually win her a Golden Globe and numerous other awards. She also gets married, to a ronin musician named Will trying to find himself in a creative writing master’s program. Even as the two friends grow increasingly distant from one another, they meet infrequently—such as at Carrie’s wedding, where Meadow slinks in late to the rehearsal dinner, or at a restaurant, where Meadow is again tardy. But even so, Carrie loves Meadow and as, among other things, her marriage steadily unravels, finds herself increasingly in need of her affirmation to remain grounded.

It has been suggested that if you show someone your friends, you will reveal who you are. But the reasons for friendship, often grasped as securely as fog, do have some tangible aspects. As Kate Murphy noted recently in the New York Times, it can be as simple as “Who makes time for you? Whose company enlivens, enriches and maybe even humbles you? Whom would you miss? Who would miss you?” This is the poignancy of the relationship between Meadow and Carrie. The power of this friendship transcends their less compatible personality traits.

Having noted on one occasion how David Foster Wallace deftly utilized “language as an entry point,” Dana Spiotta likewise appreciates the inherent strength of diction in reinforcing credibility in her empathy for her characters. In a prior novel, Stone Arabia, she demonstrated an encyclopedic knowledge of the 1980s music industry and its culture, drawing on it to weave a powerfully complex family narrative. With Innocents and Others’ equally exhaustive account of the particularities, vagaries and nuances of the film industry and its practitioners, Spiotta has brought her mastery of language and its evocative powers to even loftier heights.