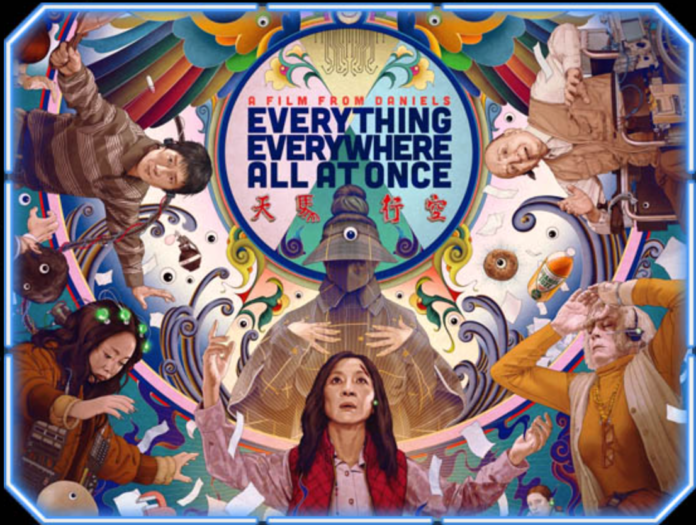 I went to see Daniel Kwan and Daniel Scheinert’s Everything Everywhere All At Once three times in four consecutive days. I know sitting in a movie theater may seem unwise during a respiratory pandemic, even with the vaccine. My frugal frame of mind fussed over spending money on the same movie, not once, but three times. Yet, to feel seen was… priceless.

I first watched Everything with three Vietnamese teacher friends when our schedules converged one afternoon. I regularly schedule time with Vietnamese friends to balance my expatriate existence in a white suburban neighborhood. Unlike those scrambling to get something Asian into their institutional programming for AAPI month for fear of being labeled insensitive, the first of May was just another day for us. We are Asian Americans 365 days a year! Our lives are similar to the lives of the characters in Everything, and our challenges similar to their challenges. In the film, a middle-aged immigrant Chinese American couple faces an IRS audit of their laundromat, the endless demands of their customers, the strained relationships with a teenage daughter, an aging father, and the difficulties of their own marriage.

Evelyn Wang (Michelle Yeoh) made my Asian selfhood visible on the big screen. Evelyn is a complex human being with multiple interests and competing obligations, facing an array of choices in the multiple universes of this sci-fi, romantic action comedy. During the audit, the IRS agent (Jamie Lee Curtis) smirks at the validity of Evelyn claiming expenses associated with being a novelist, a singer, a teacher, and a chef. I did not. I believe claiming these expenses is akin to wishful thinking for her aspirations. A woman, any woman, can be complex and have a variety of interests. I am a retired kindergarten teacher who ran experiments for three years in a Nobel Prize winner’s molecular biology lab. While rearing three children, I obtained licenses to coach soccer and teach YogaDance. I also teach adult English Language Learners. And I have been designing flowers for the Museum of Fine Arts since 2015.

Kwan and Scheinert co-wrote and directed Everything with brilliance and humor. They tackle… well, almost everything: racism, cultural differences, mental health, sexism, free will, social class, and marriage. The movie alternates between a kaleidoscopic blitz of fight scenes and those of domestic life with complicated interactions among family members. Kwan and Scheinert take the idea of a multiverse to a crescendo, crafting a complex interweaving of stories and possible worlds as if the movie were a kesi, a Chinese silk tapestry displaying scenes of human connections.

Evelyn reminded me of my mother who landed in this country at age thirty-two with eight children under thirteen. She pivoted from a life in Vietnam with a housekeeper and a driver to learning to drive and speak English while managing our family so her husband could go back to college to become a Certified Public Accountant. At times, Evelyn embodied my grandmother who, at age fifty-three, started growing vegetables in her Houston garden for supplemental income. She had left behind three houses, servants, and her wealth when we fled Vietnam. My grandmother not only cooked for scores of dinner meetings to establish the first Vietnamese church in Houston thirty-five years ago, she also cheered on World Wrestling matches with ferocity. She told my sisters, “Don’t marry a doctor. Be a doctor. You have a choice in this country.” My youngest sister is an anesthesiologist now. How would my grandmother’s life have been different in a universe where she had choices in her work and had not faced the hardships of resettlement. This is a question raised by the film. I heard it in Evelyn’s frustrated words to her daughter, “You don’t know how I fight for this family.” Words like hers resonate with refugee women like us who struggled to create prosperity for our relatives.

Like Evelyn, who questions her daughter about being gay, I did not understand my transgender child in their journey to express their authentic identity. I remember referring to my child’s girlfriend as “a good friend.” Vietnamese culture reveres parents, but the film had me contemplating respect for our children. When Evelyn ignores her husband Waymond Wang (Ke Huy Quan) to attend to her imperious father (James Hong), I winced thinking of all the times I put my parents’ needs before those of my children and husband. I thought, like Evelyn, that my parents would be distraught learning about my daughter being gay and transgender so I refrained from telling them for a long time. Reinforcing my years of therapy, Everything reminded me more work needs to be done to free myself from years of cultural imprinting on my views of gender and sexual identity and filial piety.

Like Michelle Yeoh, I was born in 1962, the Year of the Tiger. She pursued acting when an injury sidelined her dance career at age fifteen. I wonder how elegant a dancer she would be if she’d had the choice to continue dancing. What choice did I have when a war sidelined my development at age thirteen, forcing me into a refugee life in a new country. I wonder about the novels I would have written if I’d been able to continue studying in my native Vietnamese, delving into literature and creative writing. Instead, I helped care for seven younger siblings as I forged my way through adolescence in a new language.

The multiverses of the film resonated with me. I am forever being whipped back and forth between two universes. In one, I perform whiteness in the white-dominated world in order to achieve status in school and my career. I dismiss questions from others about the faraway look I get when dreaming about a universe with no bombings during my childhood, no need to escape and leave behind a life where I am part of the mainstream culture. In the other world, I just exist. I do not need to explain what I eat, why I do things a certain way, my (lack of) musical skills, or where I am from (Sa Đéc, Long Khánh, Rhinebeck, Tulsa, St. Louis, Cambridge, Milton).

Waymond embodies the effusive father and neglected husband in the laundromat-universe, then verse jumps into karate chopping his way through five security guards in the IRS lobby to prevent the evil doings of Jobu Tupaki, the movie’s villain. His daughter Joy (Stephanie Hsu) was delightfully surprising as Tupaki in runway-worthy costumes, swaggering her way across the universes. In the alpha-universe Waymond describes Jobu Tobaki as someone with intense gifts, causing her to deeply feel her many selves. I recognized in Joy the emotionally-flooded state often experienced by women of color walking into mainstream spaces. She challenges the security guards, who had her parents handcuffed and were dragging them out of the IRS office via the freight elevator. “Is it that I can’t be here or that I am not allowed to be here?” she says, before disintegrating him into confetti. How delicious to have my wish of not facing more racism fulfilled on the screen as glittering rainbow bits float about the fight scene.

Andy Le and Brian Le, two self-taught Vietnamese martial artists from Orange County, California, choreographed the zany fight scenes that took me back to my childhood kung fu movies. In the middle of one of these dizzying scenes, Waymond sobs and begs for everyone to stop fighting. The Waymond of another universe explains to Evelyn that though her father sees him as weak, he fights just the same, in his own quiet manner.

I have had similar discussions with my family about how best to protest the -isms we encounter. Do I let it slide when my mother-in-law asks me if I was “really a refugee” or do I counter with pointed questions? Do I snap at the white parent at my children’s prep school to go get her own refreshment when she asks me to do so, assuming I am the staff?

Over and over again the film reveals the daily microagressions of life as an AAPI person in this country. I found myself sliding deep into my seat, wincing, when the IRS auditor enunciates like molasses, “Why-didn’t-you-bring-your-daughter-to-translate-for-you?” I snorted when he complained about receiving incorrect change, “I thought you people were good at math!” I grimaced and hunched up my shoulders when he knocked Evelyn aside as he reached for food on the buffet table during the Lunar New Year party the Wangs host for their customers. Similar indignities have happened to me and my Asian American friends countless times.

The above scenes in isolation would make the movie unwatchable for me, but Kwan and Scheinert incorporate plenty of jokes, especially to those of us whose lives toggle between two cultures. Flipping between a universe of microaggressions and a universe where people have hot dogs for fingers, a raccoon sitting on a chef’s head to give cooking instructions, Evelyn intoning à la Darth Vader “I-am-your-mother,” or the silliness of kung fu moves using merely a little finger or an almond cookie all helped balance out the encounters with racism.

Everything juxtaposes two possible universes. In one, Evelyn is disowned by her father for marrying a man he does not approve of (Waymond) and ends up running a laundromat while raising a daughter. In the other, she does not marry, instead attaining movie star status while Waymond too becomes successful. When the dapper tuxedoed Waymond — seeing Evelyn at her movie opening — says “In another life, I would have been happy doing laundry and taxes with you,” I reached for my already soaked tissue. My father wrote a letter to disown me when I chose to marry a white man — my college classmate and movie date of nearly forty years (with whom I saw Everything my third time).

I confess to thinking about a universe in which I married a Vietnamese man, though the thought of not getting to be with my three adult children always stops my what-ifs. My parents did come to my wedding and they adore my children. I wonder how often they think of a universe where they did not have to leave Vietnam and their children married people with whom they could easily converse. But, as Evelyn said to her daughter Joy, “Of all the places I could be, I will always, always want to be here with you.”

Everything Everywhere All At Once transcends entertainment, giving us humorous unflinching looks at the life of an immigrant family. With one out of ten in the U.S. population being immigrants, seeing Everything may give you an understanding of your neighbors, co-workers, and maybe even your relatives. I imagine the Chinese garment workers to whom I used to teach English seeing this movie after their full day of sewing in the factories. I suspect for them it would be an affirming experience to see oneself represented on the big American screen. It’s an experience I wish I could give to every Asian American person in America.

Image: from A24 Films, licensed under Fair Use laws. 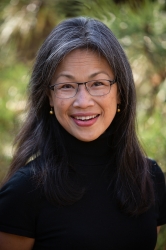 Trần Vũ Thu-Hằng
Trần Vũ Thu-Hằng is a graduate of the Memoir Incubator Program at GrubStreet. She designs flowers at the Museum of Fine Arts. One of her essays was selected for the Boston Book Festival At-Home Project. A Pushcart nominee, she has published in The New York Times, The Boston Globe, Tulsa World and Pangyrus. She is a National D-Licensed soccer coach and a YogaDance teacher. Her memoir-in-progress explores her past as a child war refugee with seven younger siblings.