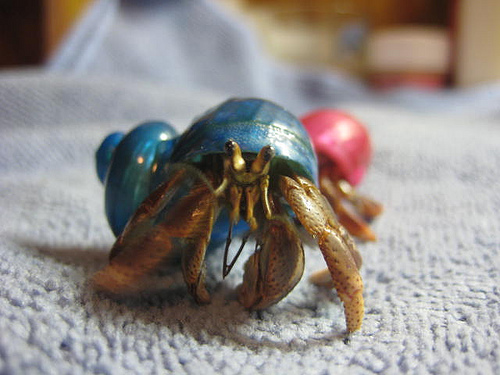 Over Memorial Day, we visited one of those touristy shops at Hampton Beach and I broke down and bought my son a hermit crab. For Lewis, part of the appeal was that the crab’s shell was decorated with the logo of the Boston Red Sox. For me, the hermit crab seemed like a good alternative to more complex life forms like geckos, guinea pigs and iguanas.

“His name is Bruce,” my son said lovingly as the crab clamped onto his finger and drew blood, “I think he likes me!” On the ride home, Lewis sat in the backseat with a cardboard crab container on his lap and cooed to Bruce through the air holes.

“Why are you talking to that crab, you moron,” Lewis’ fourteen-year-old sister said. “Crabs can’t hear you, and even if they could they don’t even have brains. They’re like lobsters. I think we should cook him.”

“Don’t listen to her, Brucey,” my son hissed into the box. “She’s just jealous.” At home we found an old ten-gallon aquarium, one that is haunted by the ghosts of deceased goldfish and long-dead gerbils and transferred Bruce to his permanent digs.

“Bruce needs a more interesting habitat,” my son said as be proceeded to arrange Lego guys and plastic dinosaurs in the tank. The crab seemed unimpressed. At the store, he had been more lively, but here, amid a T-Rex and sword-wielding pirates, he was a little lethargic.

“Maybe he’s just tired from the long drive,” I suggested.

We sent to our local pet shop to stock up on hermit crab food – even though I suspected that Bruce wouldn’t live to consume much of the fishy-smelling powder that Lewis piled into his tiny seashell dish. We also bought a sea sponge, so Bruce wouldn’t become dehydrated, a bag of neon-orange pebbles, to mimic his natural habitat and we blew seventeen dollars on a plaster castle that might have added a little more quality to the short life of the now-dead goldfish that once inhabited the tank. This was one lucky crab.

“Bruce is going to be soooo happy,” my son beamed as he festooned the tank with our new purchases. He also added a Spider-Man action figure, a handful of marbles and several Hot Wheels cars. The environment in the tank was so rich, so stimulating, that it was hard to even locate the crab. When I did, he looked suspiciously…dead.

“I think you might want to take a look at Bruce,” I said in a gentle tone.

Who was I to question his expertise? Maybe crabs did sleep. So I took a pair of tongs from the kitchen and moved Bruce into a realistic pose near the sponge.  Maybe some water would perk him up.

“See, Mom? I told you he was just asleep,” Lew said as he gently dumped more food into the seashell dish. “Bruce is drinking water now.”

“Did you see him walk there?” I asked.

The next morning, the crab’s thirst was apparently still not quenched. While Lewis brushed his teeth, I used the tongs to reposition Bruce at the door of the castle. He looked good there. In fact, he stayed in that position for several days – until Lewis needed to retrieve his Spider-Man action figure.

“Hey! Bruce is guarding the castle!” Lewis exclaimed when he noticed the crab’s new post. I pondered Bruce’s next move and wondered how long I should carry on the charade.

Turns out, a dead hermit crab is a pretty good pet. He doesn’t eat anything, so his cage never needs cleaning and the faint stench of rotting shellfish emitting from Lewis’s room not only adds a waterfront ambience to the whole house, it has given our geriatric cat a renewed sense of purpose. The only maintenance required, is periodically moving the shell to simulate lifelike activity.  The dead crab’s antics have kept my son amused now for over a month. Sometimes Bruce is atop the sponge “drinking.” Other days, he’s positioned near his food dish and sometimes, he’s wedged inside the Hot Wheels convertible ready to race around the tank.

“I like Bruce, “ my son said yesterday, “but when he dies, I’m going to make a necklace out of his shell.”

I can’t think of a more fitting memorial.

Photo: “Hermit Crab” by Jessica Diamond, licensed under CC BY 2.0

Carol Band
Carol Band's humor column, "A Household Word," won numerous awards--including the Gold Award from Parenting Publications of America for two consecutive years--and was collected into a book of the same name.Her writing has appeared in The Boston Globe, The Boston Parent's Paper (where this column first appeared), L.A. Parent, and AARP Magazine, as well as websites Humorpress.com,parenthood.com, and others.

Carol Band's humor column, "A Household Word," won numerous awards--including the Gold Award from Parenting Publications of America for two consecutive years--and was collected into a book of the same name. Her writing has appeared in The Boston Globe, The Boston Parent's Paper (where this column first appeared), L.A. Parent, and AARP Magazine, as well as websites Humorpress.com, parenthood.com, and others.