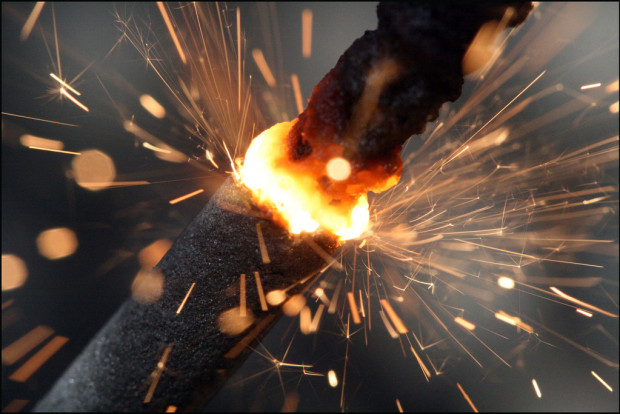 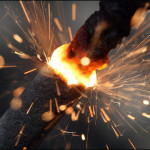 Grampa bought it for me, and this is a free country so I can do anything I want with my Giant Red Devil deluxe fireworks assortment. Everyone in Aunt Del and Uncle Henry’s cul de sac is sharing fireworks, and so am I—except for my two boxes of extra brilliant multicolored sparklers. I have a plan:  all twelve at once!

The lady with the blonde beehive reaches for them, the only multicolored sparklers I’ve ever seen, and who knows when they’ll sell them again? So I shout, “Wait, not those!”

“Well, excuse me.” Her mouth tightens, and she walks off in a jerky way that means I’ve been stingy.

I want to explain, I’m saving them for last, the topper for our whole three-ring star-spangled show.  But she’s gone, and I’m sad because she hates me now. Do I have to share everything for people to like me? Still, this power is thrilling: an adult did what I said.

Nobody bugs me again. A dozen adults in charge of two-dozen Artful Dodgers is no supervision at all. I’m invisible, master of my own ammo. Most of the fireworks are over. The only ones left are boring spinners and dumb black snakes, which you can barely see ’cause, duh, they’re black. I slide all twelve special sparklers out onto the sidewalk, far from the crowd, readying them.  Then I grab one of the ordinary sparklers and get a light from another kid.  Nobody stops me, because nine-year-olds know all about sparklers: hold them away from your face, don’t point them at people, and write your silver name in the air. I grin at the fizzing burst of light; it’s like looking into the sun, spots jumping across my eyes.

Two by two, three by three, they burst into a fireball more blinding than the sun. I’m the Statue of Liberty, torch aloft like a bouquet of stars, destruction in my hand, my exploding Declaration of Independence.

Then my hand is on fire, like I’m really holding the sun, a lit stove, a hot metal playground slide. I scream, the way women scream in scary movies when the atom bomb turns tiny bugs into gigantic monsters. This is my bomb, and duck-and-cover won’t help.

But there’s some ivy right there.

I throw it into that cool waxy green: this missile as stupendous as the fireworks they shoot into the sky on the TV show “Love American Style”—because love is like that, burn-you-up hot. I hope nobody saw, laughed at me ’cause I throw like a girl. I sob because my hand feels like it’s about to burn off…and because I gave up so easily. Why couldn’t I hold on? I saved the best for last, and it’s gone. My Haley’s comet has split into falling stars, still pretty but not amazing anymore.

Water gushes from a hose. Someone drags me inside, one word following us: “drought.” I know what that means. It means Los Angeles is so dry they almost outlawed fireworks, so dry people have stopped running sprinklers and every lawn is crackly brown. Sparklers are giant matches. The ivy is in front of Del and Henry’s. What if their house catches fire?

What if they die?

I cry harder. I like Del and Henry, who laugh loud and bright even when nobody’s joking. They got mad when I convinced Ronnie to jump on the bed and he cracked his head. Now I’ve really done it: now they’ll hate me. I’ll go to reform school like Mickey Rooney in that movie I saw with Gramma. I’ll turn into a gangster. I cry even harder. I don’t want to go to jail, not for this.  I’d want to be a criminal like Bonnie and Clyde, who never killed anyone, just robbed banks while people cheered.

Except they died at the end.

In the kitchen, Gramma shoves my hand under the shiny chrome faucet, into the strand of cold water. I’m hiccupping with worry because my hand’s red-and-white with blisters; molten lava bubbles under my skin, and the water’s no help. Del pulls a metal ice cube tray from the freezer, pushes the lever back and forth, making it screech until ice breaks free. She pours cubes into a bowl and sticks my hand into the bumpy freezing cold, replacing the pain with a strange but soothing feeling.

Henry put out the fire with the hose. That’s a relief, although fire trucks would’ve been exciting.

Grampa holds me on his lap while the ice turns my hand numb. I tell him about the angry lady with tall hair. He says, “Maybe she just didn’t understand.”

But maybe she did, maybe she knew my greediness would lead to no good.

I lie across the backseat of Grampa’s gray Renault, listening to Gramma laugh at me for having “no common sense,” while Frank Sinatra bores me to sleep. My hand is orange and pink with Mercurochrome and Band-aids. I rub the smooth plastic and picture it again, erupting from my hand like a volcano, like an atom bomb, like the end of the world.

I smile in the dark. I just need a better plan. Because I really want to see that again.

Cara Lopez Lee is the author of the memoir They Only Eat Their Husbands (Conundrum Press, 2014). Her stories have appeared in The Los Angeles Times, Denver Post, Rivet Journal, and Connotation Press. She’s a book editor and writing coach. She serves on the faculty of the young writers program at Lighthouse Writers Workshop. She was a television journalist and a writer for HGTV and Food Network. She has traveled extensively in Asia, Africa, Europe, Latin America, and the United States. She and her husband live in Denver.

Cara Lopez Lee is the author of the memoir They Only Eat Their Husbands (Conundrum Press, 2014). Her stories have appeared in The Los Angeles Times, Denver Post, Rivet Journal, and Connotation Press. She’s a book editor and writing coach. She serves on the faculty of the young writers program at Lighthouse Writers Workshop. She was a television journalist and a writer for HGTV and Food Network. She has traveled extensively in Asia, Africa, Europe, Latin America, and the United States. She and her husband live in Denver.