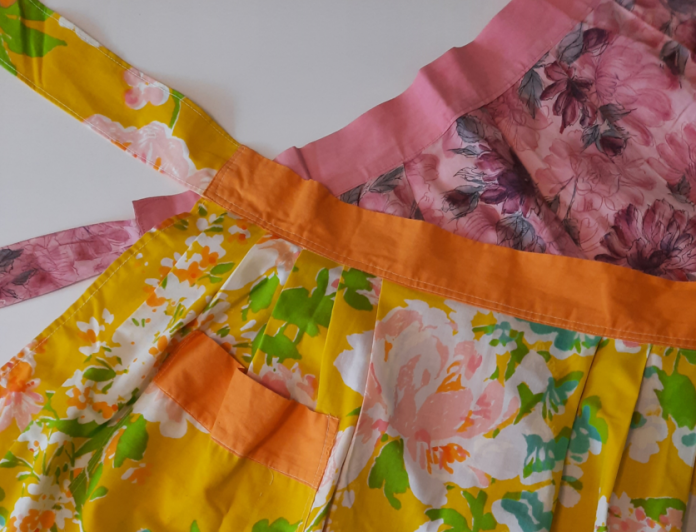 After my mother’s death, my sisters and brother and I embarked on a task familiar to many adult children: clearing out our childhood home. My father had died a few years before. The house my parents had shared since 1957 was a set-in-amber archive of family photos, letters, recipes, books, clothes, and tools.

We unearthed a trove of artifacts from our middle class, mid-twentieth century life: formal gloves used for church, glass-lidded CorningWare casseroles with their signature blue and white cornflower design, and portable transistor radios that had magically connected us to Top Forty songs. Each item carried its own story for me, unspooling a resonant internal movie.

Even so, I was surprised by a drawerful of aprons, a stack of memories colorful and neatly folded. Some were jewel-toned taffeta that my mother had worn for elegant dinners served to a houseful of guests. Some were cotton in florals and plaids, which I’d worn as a very young child helping her make cinnamon rolls, chocolate cake, homemade pasta. Back then, putting on an apron was as much a part of the pre-baking ritual as washing your hands. These aprons, tucked away for decades, prompted a tumble of feelings way beyond their form or function.

The female apron-wearers in my large extended Italian Catholic family were a mix of mostly housewives and some working mothers, and each one was an exquisitely talented domestic artist. They all cooked fabulously and seemingly continuously. During my formative years in the 1950s and 1960s, takeout food was an occasional treat in our family, not a dinner fallback option. An apron was as essential a tool as their hand-held mixer or upright vacuum cleaner.

Like cooking, laundry requires time and measurements. A competent housewife would know how to allocate portions; how to make things last. An apron could significantly reduce the amount of clothing in the laundry basket, on the clothes line, in the mending pile, at the ironing board. An apron could create extra free time: to talk on the phone, finish a cigarette, drink a cup of coffee while it was still warm. Then in the 1970s, as the second wave of feminism crested, the apron changed from useful accessory to badge of oppression of the women who devoted their lives to making other lives easier. As in any new movement that encounters heavy pushback, lines were initially drawn sharply to delineate new ground. Because kitchen expertise was a fundamental component of the middle-class housewife role, its luster faded. The modern woman needed to have bigger priorities than checking an oven timer.

In my mother I had the best culinary teacher a daughter could hope for, but by the time I entered high school I’d lost my appetite for the skills that underpinned a flaky pie crust or ensured that veal scallopini turned out both tender and crispy. Although I still liked the process of cooking, I began to view it as a lesser, disposable craft. Where before I had marveled at the magic my mother and aunts spun in creating abundant family feasts, now I only saw all the effort beforehand, and for all of that, how none of the finished product lasted a long time in the way that building a cabinet or fixing a car did (see: traditional work, male).

I also couldn’t help noticing that even on the day of a party, my mother and aunts never truly relaxed. They were lively participants in all the overlapping conversations. But it was only the women who monitored how much food was left in the serving platters, only the women who continually left the table to refill coffees or to whip cream for desserts, only the women who organized the (female) cousins to wrap up leftovers for everyone to take home.

Cooking and baking seemed the ignore-at-your-peril fine print of Happily Ever After: if I got skilled at the stove, I’d always be at the stove. It felt safer to help out by doing the more neutral tasks of setting the table or washing the dishes. I kept my blasphemous opinion to myself; it was simpler to become the one kid in our family who just didn’t like cooking. Simpler, but not easier; I knew my mother was baffled and more than a little sad that I had abruptly lost interest in something she not only held dear, but was justifiably proud of. I also felt guilty because, of course, I continued to benefit from her gourmet cooking skills, not the least being part of a household known among my friends for always welcoming guests to our bountiful weeknight dinners.

It wasn’t until I had my first apartment after college that my kitchen phobia began to evaporate. This was partly pragmatic: unless I mastered even a few recipes, I’d eat through most of my new paycheck in takeout food. My dormant cooking interest re-awoke in a surprisingly strong way and with it came a new recreational activity of devising menus for myself and to host friends.

On trips home, my mother and I began to spend part of the visit cooking together, with her happily, belatedly sharing epicurean wisdom. She viewed my newfound culinary interest as another life phase, like a hobby taken up when young, dropped, and then picked up again as an adult. (I remember that at that point we used aprons only for baking; a stray drop of sauce on clothing could be easily dispatched, but puffs of flour on a sweater or pants was too annoying to contemplate.)

I began to replace my smaller truth, the dismay at a table’s worth of food quickly disappearing, with a larger truth: home-cooked food is often a key ingredient to forging enduring memories with family and friends. This seems a blindingly obvious statement, now; forty years ago, it felt like a thorny one.

When I became a mother of two kids, I did indeed spend countless hours in the kitchen, and juggled work and domestic duties like every other mother I knew. As glad as I was to have more professional opportunities than my mother had known, I was also aware that at the end of a work day the symbolic, if not the actual, apron awaited. My husband, never a cook, does kitchen cleanup. It’s an efficient division of labor, though not an equal one. Cleanup is nowhere near as fun as cooking, but it is not time-sensitive: there is no meal planning or meal prep involved, interweaved with kids’ activities and business meetings.

In the 1990s, some forward-thinking tech companies had evolved enough to allow working at home for part of the week. On my at-home days, I scheduled my work across daytime and evening hours, alternating that with pre-dinner tasks of chopping vegetables or preparing pasta sauce, or family baking time, with our dining room table covered with flour, our kids kneeling on chairs mixing cookie batter or frosting cupcakes. I’ve saved their little smock aprons; mementos of afternoons both busy and cozy.

It was during these years, long after I’d first edged back to the stove, that cooking finally became an uncomplicated and satisfying aspect of my life. If I was now in part defined by the meals I created, that part turned out to be expansive, not constrictive.

Our son and daughter, now adults, consider the kitchen, simply, a place of food; not a trap or a cultural symbol. Our daughter is an especially creative cook; unlike the younger me, she has never considered cooking an either/or option for how to manage her professional and personal life. She and her brother came of age in an era where men as well as women have food blogs and compete in TV cooking or baking shows. For them and their friends, food prep is unyoked from gender roles; it can be a basic daily activity, or transformed into sport, or elevated into art. No apron required.

I still cook and bake wearing just everyday clothes, but occasionally I take out one of the vintage designs I’ve saved from my mother’s apron collection. On a recent Sunday afternoon, getting ready to make a batch of her wine biscuits, I selected a floral cotton of pale pink and green and yellow. I began the pre-baking ritual. I washed my hands. I put on the apron, and shaped the long ties into a bow, my mother’s hands once again guiding my own.

Image: The author’s own. 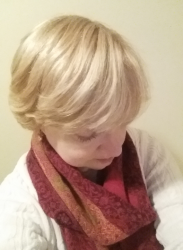 Carol Iaciofano Aucoin
Carol Iaciofano Aucoin has contributed book reviews, op-ed columns, and poetry to publications including The Boston Globe, Calyx, The Hartford Courant, and WBUR's The ARTery. She is co-author of "Digital Deli," an anthology of writing on computer lore and culture.