“Bakers, welcome back to another round of Baking for the Masses!” The host beamed at the contestants, gaze sliding just above the level of the TV camera trained her way. “As you know, each week we prepare a special ingredient for you, which must star in a recipe of your choosing. Our judges will sample your bakes, and one baker will be eliminated from the competition. Naturally, the loser will be fed to the Masses.

“Tonight’s key ingredient is Olive oil. You’ll find a bottle of it on your benches. Use as little or as much as you like, but we want you to create a satisfying dessert that incorporates the key ingredient. You have two hours. Now… bake for the Masses!”

The three remaining contestants leapt to action: there was Germaine, who’d lived in Bledlow all her life, had three daughters of 5, 6, and 8, and worked part-time at the library; Steven, a newlywed who baked as stress relief from his volunteer firefighter role; and Penelope, a recent law school graduate who wore chunky sweaters and chunky bracelets and kept her red hair in a ponytail.

Each of the three had their own workbench crowded with glass bowls, whisks, measuring cups, spoons, and ball jars full of flour and sugar. The Olive oil shimmered darkly at the head of their tables. The workbenches sat twenty feet apart within a shared tent, the ceiling a heavy, drooping white and the walls clear plastic. Early on, the competitors had chatted with each other across the room, back when there had been more than a dozen of them. Now that their numbers had dwindled to three, they didn’t speak much.

Germaine grabbed a bottle of white wine and poured some into a bowl. She tossed in a handful of anise seeds and set her timer for one hour. She wouldn’t lose this competition—she couldn’t. She needed to show her daughters that she could win. That if ever they were forced to compete on Baking for the Masses, they could survive.

That was her only option left. Her goal, now that the original plan to poison the Masses had proven impossible.

It was the host who had shattered that dream during the perfunctory orientation. The contestants had gathered in the tent, twitching at every distant shriek from the pit outside. The Masses hadn’t been fed human flesh—the only thing that really calmed them—in nearly a year.

“The Masses eat everything. Anything. It can be burnt, it can be sour, it can be made by my sister—just kidding!—heck, they’ll eat the tin the pie comes in and wash it down with bleach. You really can’t do wrong by them.” Then the host, slender in a silver suit, had laughed. “But of course you can do wrong by us.”

So now Germaine’s only option, her only Plan B, was to win. To get back home to her daughters a champion.

To get back home to her daughters at all.

Penelope’s plan never involved the Masses. She was smarter than that. At her workbench, she rolled up the sleeves of her favorite orange paisley sweater—one she never would’ve worn while baking if she wasn’t on the show—and filled a bowl with cashews, walnuts, pumpkin seeds, and golden raisins. She poured in maple syrup and drizzled Olive oil over the top, then tossed it all together and laid it out in a pan.

Each bench came equipped with an oven. As she knelt down to fiddle with the settings on it, something moved out of the corner of her eye. Her head jerked in the direction of the tent wall. A perpetual mist, thickening into rain, obscured the finer details beyond the transparent plastic. The sloping green field blurred into a smudge of trees in the distance. Between here and there a mottled lump loped across her view. There were appendages, white and black and purple. Then the thing launched itself out of sight, at a speed too fast to follow. Beyond the tent walls erupted the panicked bleating of a sheep, then silence.

Masses, Penelope thought. She reached into the oven and used her mitted hand to shake the tray of granola. Impatient monsters, the lot of them. That’s why she didn’t bother with them. Instead, she focused on the other contestants. Figured out what they were making, then made sure they were just barely short an ingredient. It would be too obvious to hide a whole bag of desiccated coconut, but if someone needed a cup and she took all but a half-cup, well then, they needed to change their plans last minute or else risk the judges saying they couldn’t taste one of their flavors.

Speaking of. She looked back at the bench behind her. Arranged in front of him Steven had a pyramid of eggs, a bag of shelled pistachios, and a vanilla bean split open like a body mid-autopsy. He was using what looked like a dental pick to scrape out the seeds. At his elbow were the Olive oil bottle and the standard jars of flour and sugar. Nothing exotic at all, certainly nothing the staff would be short-handed on.

Penelope made a show of fumbling her jar of salt. An avalanche of it tumbled down her chest and ended up in her apron pocket. She dumped blueberries and sugar in a pan, and cream and vanilla in her ice cream maker, before she hurried over to Steven’s bench. As her shadow fell into his mixing bowl, his head snapped back. His eyes were deep set and haunted.

“Steven, have you more eggs?” she asked quickly. She gestured behind her at her sizzling pan, her flashing oven light, her ice cream maker with its open lid. “I’m short, please tell me you’ve more!”

“Yes, hold on, hold on—” Steven snapped to attention, looked everywhere along his bench.

“You need all those?” she asked, moving aside his sugar jar to reveal his pyramid of brown eggs.

“Yes—the fridge—” He made a break for the refrigerator at the back of the room. He came back with four eggs clutched in one massive palm, his fingers long and unsettling, cradling the delicate shells.

Penelope thanked him, slid them into her apron, returned to her bench.

Steven felt sweat fill the creases of his forehead. Will be me next, he thought, me next.

Must focus. Or me next.

His pals at the firehouse had reassured him when they heard he’d been chosen to participate. “You’ll kill it,” they’d told him, an ominous prediction. To date he hadn’t killed any of them, and there was certainly far more than one of “it.” Would that he could kill them! Would that he had his fireman’s axe! But District Chief Lou, who everyone said had personal experience with the Masses, went all glass-eyed at the suggestion that they could be killed with an axe. Son I’ll put it this way; they don’t react the way you think they will.

Stop thinking about them! Steven beat sugar and butter together. He cracked eggs one-handed into his mixer as it whirred. A thousand times, he’d made this cake—perhaps more. He made twenty of them for the Firefighter’s Fundraiser every year, and he made them for his Monday night shifts every week, and he made them for his wife to bring to the elementary school where she worked.

That was one advantage he had—he wouldn’t need to stop and taste and adjust like the other two would. He had faith in himself, in this recipe. He poured Olive oil into the mixer in a slow stream. It glittered, dark drops of it spattering the sides of the bowl. He winced, looked away. No, he certainly wouldn’t be taste-testing this.

“Bakers, your time is up!” shouted the host in the silver suit. She beamed at the three bakers, who looked as exhausted and floured as they did every night. The two judges stood on either side of her, one an elderly Asian man with papery lips and bottle cap glasses, the other a young woman in a blood red dress. “Let’s start with you, Germaine; please bring your dessert to the front.”

Germaine presented her ciambelline al vino to the judges, who bit into the ring-shaped cookies with their best poker faces.

“Good,” said Peter Zhelan, who had four high-end restaurants in Hong Kong and a growing chain of “authentic Chinese food for the European palate” across England and France. “I can taste anise seed. Nice crunch to it.”

The woman in red, August Montgomery, was the executive head chef for the hotel at which foreign dignitaries stayed when they visited Washington D.C. She waved her hands when she spoke, two fingers pinching a ciambelline moon. “It’s so wonderfully subtle. I’m picking up the wine, I’m picking up the fruitiness from the Olive oil. Well done, Germaine.”

Penelope brought up her dessert next. “It’s blueberry ice cream with homemade granola.”

The judges tried each element separately, then together.

“A fun combination,” August called it. “Together or sep—”

From overhead came a screech, sharp and prolonged but only just loud enough to interrupt her, as if a pointed rebuke of her feedback. The sound tapered off into an almost-human groan. Long indentations appeared in the ceiling of the tent, accompanied by the squeal of nails running down the heavy plastic. Peter’s eyes drifted upwards.

“Together or separately,” finished August with a smile. She looked at the sweating man in the back of the room. “Steven?”

He brought up his Olive oil cake, topped with pistachios and a lemon-sugar glaze, then wordlessly stepped back to await judgment.

Peter Zhelan cut the cake. Both judges murmured about how well the bake looked inside. They took bites.

Immediately both of them blanched. Steven felt a cold fear break out in his stomach.

“Steven, did you put salt in this?” asked Peter.

“Not a chance,” August said. She shook her head roughly. “Tastes like you added a few tablespoons. It’s inedible.”

Two colossal men entered the tent and grabbed Steven around the biceps, near-lifting him off the ground. He struggled, shouted for mercy—“There’s been some mistake! Please, please! I’ve made it a thousand times!”—but even the volunteer firefighter could not break free of the guards’ grasp. They dragged him outside, and a minute later, the remaining contestants heard a guttural scream, and when that abruptly stopped, the horrible crunch of bones.

“Well, ladies,” said the host with a grin, “congratulations on making it to the finals of Baking for the Masses! We’ll see you back in the tent tomorrow night for the final round, when the special ingredient will be Steven flour. Make sure you get plenty of rest tonight, and remember to lock your doors and windows to keep out the Masses—good night!”

Image: “Cooking tongs stand-off!” by George (Digisnapper) (On and Off!), licensed under CC 2.0 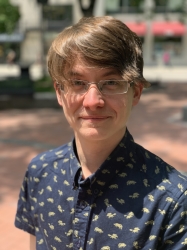 Zachary Spence
Zachary Spence writes queer/trans-positive fiction both short and long. An amateur (vegan) baker, he haunts the marshes of Boston with his partner and their kittens Jasper and Julius. "Baking for the Masses" is his first published piece.