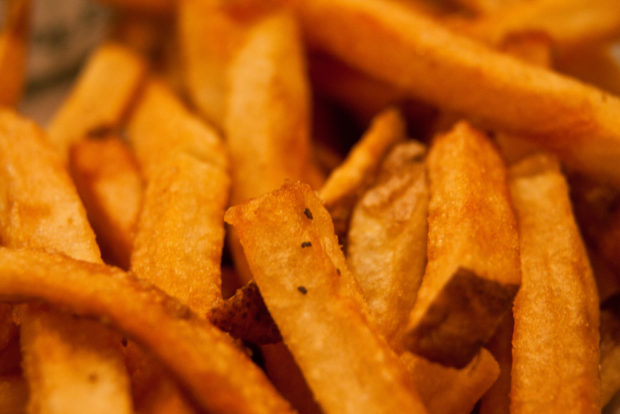 As a child in Cuba I couldn’t stop eating my father’s French fries. Once I caught a glimpse of him in our small kitchen, skimmer in hand, eyes fixed on our oldest, greasiest saucepan, I knew better than to go outside and play. As soon as he retrieved the first batch of sizzling fries, I would sneak up behind him, hover surreptitiously over the plate on the counter, and snatch one of the top fries. I would repeat this maneuver three or four times, sometimes opening the refrigerator as a decoy. Eating fries before dinner ensured that, if my mother decided to give us all equal portions at the table, I would have eaten more fries than the rest of the family by the end of our meal.

On a couple of occasions, Dad caught me red-handed. He would make an unusual sound, similar to what he’d yell to shoo away an intruding pet, followed by a “hey!” Though his tone seemed playful, he’d make a gesture as if to swat me away like a fly. I would scurry toward the living room, only to take a peek moments later, waiting for an opportunity to pilfer again. With the passage of time, this ritual was replaced by a more memorable one: my father leaving his fries on an otherwise empty plate for me to devour. This has been, by far, Dad’s clearest sign of paternal love for his oldest son.

From their firm yet bendable texture, their soft, almost spongy interior, and their sparkling yellow surface—like tiny, delectable sun rays—my father’s French fries are simply irresistible. They have always been my favorite food. There was no gradual process in my tasty obsession, no unforgettable experience that suddenly attracted me to them. I’ve always been in love with this food.

A couple of days before my tenth birthday, my mother inquired about what gift I wanted. “I want a full plate of Dad’s French fries,” I told her.

Had there been other options—expensive toys, a nice weekend trip, a brand new pair of tennis shoes—I might have asked for one of them. But this was Cuba, early nineties, right at the beginning of the Special Period. You were lucky to have a decent serving of food in front of you twice a day, hence a large enough plate of French fries could put the family out of potatoes for a week. I was lucky when my wish was granted. It ended up being the best gift I ever got while living in my native country.

My mother and my wife have repeatedly asked me what it is about my father’s fries I can’t resist. They are intrigued not only by my insatiable craving, but by the fact I don’t sprinkle fries with salt prior to eating, a custom in the majority of Cuban households. Those outside my family who’ve come to know me throughout the years, when learning about my obsession with Dad’s French fries, often make the assumption that it’s probably not the way he makes them but the quality of the potatoes he chooses. Regardless of whether he used the dirty, nearly rotten potatoes allocated through the rationing booklets in Havana, or the ones my grandfather occasionally brought from the countryside, or the Idaho and red potatoes he procured from supermarkets and local vendors in Miami when we immigrated there, they all taste the same.

Truth is, I can’t explain or pinpoint the heart of my obsession. I could claim it’s a combination of things—the taste, the feel, the memories—but in the end I believe my fascination is inexplicable. And I prefer it that way. I see it as a kind of spell, a touch of culinary magic I dare not disturb in fear that it may ruin my delightful relationship with the fries. As hard as I’ve tried, I’ve been unable to replicate my father’s success, yet I dare not ask him what his secret is. I mean, what if I ask and the magic goes away? What if Dad starts to overthink it? What if he loses his touch? What if I figure out the trick and lose interest? The thought of all this alone scares me. I just say, bring them on.

Today, a mountainous plate of Dad’s fries still has the same effect on me. It’s a hedonistic experience I refuse to give up. That’s why, whenever I call my mother and tell her I’ll be dropping by for dinner, I hear my dad holler in the background, “Tell him we’re out of potatoes!”

Dariel Suarez
Dariel Suarez is a Cuban-born writer who immigrated to the United States with his family in 1997. His story collection, A KIND OF SOLITUDE, won the 2017 Spokane Short Fiction Prize and is forthcoming from Willow Springs Books in fall of 2018. His work has appeared or is forthcoming in publications such as The Kenyon Review, Michigan Quarterly Review, Prairie Schooner, and The Massachusetts Review, among others. Dariel is the Head of Faculty and Curriculum at GrubStreet and currently resides in the Boston area with his wife and daughter.
Latest posts by Dariel Suarez (see all)
Share Tweet

Dariel Suarez is a Cuban-born writer who immigrated to the United States with his family in 1997. His story collection, A KIND OF SOLITUDE, won the 2017 Spokane Short Fiction Prize and is forthcoming from Willow Springs Books in fall of 2018. His work has appeared or is forthcoming in publications such as The Kenyon Review, Michigan Quarterly Review, Prairie Schooner, and The Massachusetts Review, among others. Dariel is the Head of Faculty and Curriculum at GrubStreet and currently resides in the Boston area with his wife and daughter.