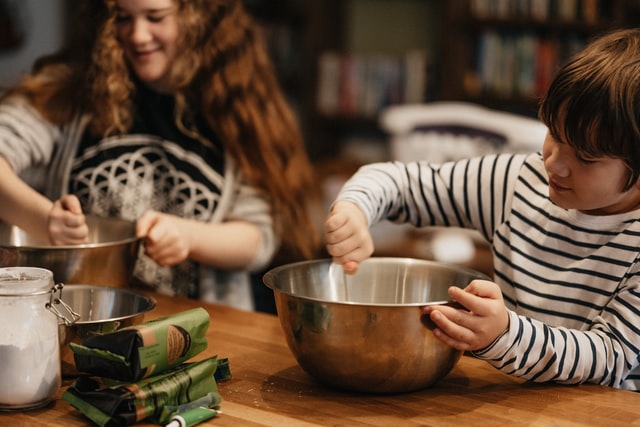 A Passover Seder is a festival of guests. It’s a gathering of extended family, a circling of friends to re-tell the story of the exodus of the Jews from slavery in Egypt to freedom in the Land of Milk and Honey. Before the pandemic, shoulder to shoulder we prayed and opened the door to Elijah, who may reveal himself in the guise of a stranger.

Last April, Zoom seemed the answer to the isolation the pandemic had brought on, a new and miraculous way to honor tradition and have guests. Instead of parents and cousins, our table gave pride of place to a laptop. My sons and partner and I alternated readings between people in the flesh and those in the pixel. Despite the terrible lag, we tried to sing and talk and nearly tipped several of glasses of wine into the keyboard of my work computer.

It was, despite all best intentions, unsatisfying and stilted in the way group Zoom often is. This year I swore to find some better way to share the holiday. And I think I’ve found it.

Invite the laptop in earlier. All the way to the kitchen.

I admit it’s not the most intuitive idea. I grew up thinking that, other than the excitement of scouring the house for stale bagels and other chametz, the action begins after the food is ready and you sit down with your hagadah. But that’s because, as a boy, I wasn’t expected to be part of the shopping or cooking. In fact, at my grandmother’s house in Jacksonville, Florida, where dozens of aunts and uncles and cousins would gather each year, none of us boys were allowed to so much as set foot in the kitchen, no matter how tempting the smells, or alarming the clattering of pans.

Even once I’d grown to be someone who loves cooking, and prepared the Passover meal and the seder plate myself, I kept to the theater my grandmother had established. Days of anxious prep work and chaos behind the scenes, then the curtains go up on the food — with the drama of whether, having been kept warm for roughly the duration of Exodus, it had dried out more thoroughly than the Red Sea.

This all changed the year of my divorce. I was newly a single parent with two young boys to raise. My workload had increased massively to meet the mortgage payments that were now my responsibility alone. I couldn’t muster the energy to plan, and I was feeling so isolated from former friends I didn’t get us invited anywhere else, either. Out of necessity, I changed the pattern: my sons and I would cook together.

It turned out to be the most inspired seder we’d ever shared. Instead of watching me point at alien objects on a seder plate, my sons interacted with and took ownership of the elements of the ceremony. Elliot, my oldest, held the bloody lamb shank gingerly between two fingers. “Why are we cooking this, if we’re not going to eat it?” Ari, my youngest, an enthusiast of boiled eggs and apple slices, wrinkled his nose at the idea of roasting the one and pouring wine over the other. “Why are we doing this?”

Why, in short, was this night different from all other nights? The question came up naturally. As did the stories. As did their involvement in our shared history, both the official prayers and stories, and the tradition, just as ancient, of doing the work in the kitchen. By the time we sat down to flip through the Hagadah, we realized we’d covered nearly all of it. What remained was to enjoy the meal we’d prepared, dot some plates with wine, open the door for Elijah, and sing Dayenu. It was enough for us.

Ever since, if we’re home for the seder, I make the preparation a shared endeavor, and see the kitchen as the center of the ritual. This year, our second in the pandemic, I’m going to do the same — by sharing the making of the meal via Zoom.

What gives me confidence it can work is that several times already this year, from my home in Boston, I’ve prepared food alongside my brother and sister on the West Coast, and my mother in Chicago. It turns out something miraculous happens when instead of settling for the fixed, headache-inducing stare at the screen that makes Zoom sessions listless, you busy yourself chopping onions. Jokes, conversational rhythm, the whole knack of being social, comes back as if it had never been gone. The smells, the tastes, the tactile quality of working together over a stove keep you in your body — exactly the opposite of what video calls normally do.

So we’ll see if it works for the seder. And pray that next year we’ll be, if not in Jerusalem, then at least as vaccinated as our cousins in Israel. If it works well enough, maybe we’ll just make it tradition. After one cooking session, my mom, who even pre-pandemic had to travel to one coast or another, looked up from her plate of zucchini fritters as if struck by a thought. “We’ve lived apart for a long time,” she said. “Why did it take a plague for us to learn to do this?”

Greg Harris
Greg Harris is the founding editor of Pangyrus, and the founder and co-director of Harvard LITfest. His essays, reviews, and stories have appeared in the Boston Globe, The Washington Post, the Chronicle of Higher Education, Harvard Review, Jewish Fiction, Earth Island Journal, and elsewhere. His translation of Indonesian author Seno Gemira Ajidarma’s Jazz, Perfume, and the Incident is part of the Modern Library of Indonesia.