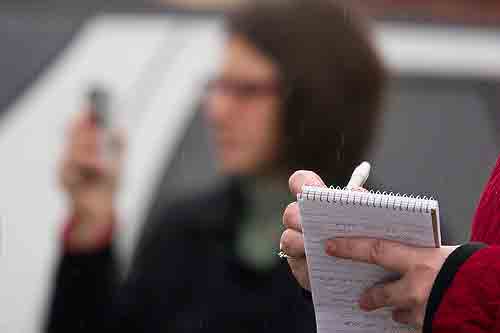 I put it off as long as I could. Covered up, as people do; smiled and nodded. Finally I gave in and went to an audiologist.

She sat me in a booth and covered my head with large earphones. I could see her through the window, taking notes. If there was a period of silence, I watched her face for clues. It was a test, after all; I wanted to do well.

Afterward, we went over the results. “Mild hearing loss,” she said cheerfully. “Comes with age. You probably don’t even notice it except when you’re trying to have a conversation somewhere noisy.”

I didn’t mind so much about conversations. One can always shout. But noisy public places are prime eavesdropping territory, and for a writer, that matters terribly.

Writers are nosy. I say this without apology, as nosiness is a requirement of the trade. For writers, as for actors, observation fuels invention. Our natural aspect is that of a fly on the wall, our patron saint Harriet the Spy.

As both human nature and language are the proper study of writers, eavesdropping is not a trivial pursuit. It’s a means of staying in touch with the ever-evolving vernacular and transcending our narrow personal circles. Hearing in general is so vital to writers that deaf writers are as rare on the ground as deaf musicians; yet some degree of hearing loss is almost inevitable with age. The first time I heard about Sheryl Sandberg’s Lean In, I thought someone had finally come up with a practical solution, cheaper than hearing aids, though limited in efficacy; there’s only so much you can lean in without landing in someone’s soup.

Eavesdropping has always been a rich and essential resource for me. I once spent 36 hours in a Brooklyn ER with my younger son, waiting for a bed to open up. Despite my anxiety, I spent that time doing what writers do: observing and listening. And before my son was even released, I knew that I’d found the perfect setting for a book I’d long wanted to write.

It’s not just me. There’s a reason, apart from coffee, why so many writers work in cafés: they’re great places to eavesdrop. Buses, trains, waiting rooms and bleachers are all excellent resources, but my personal favorite was always the diner. The booths provide enough illusory privacy to encourage revealing conversation, enough real privacy to allow me to take notes. I’ve overheard break-ups and make-ups, quarrels and seductions, women dissecting men, men puzzling over women, doctors dishing about patients, cult recruiters exchanging tips. My favorite bit of found art was a conversation between a father and his young son.

“You know, Dad,” the child said thoughtfully, “some of the best things in life are things you can’t buy with money.”

“Like friends,” the boy said. “And a family that loves you. And picking your nose.”

So I didn’t take the audiologist’s diagnosis well. Any degree of hearing loss threatened me where I lived; think of a painter with cataracts. Everything else aside, hearing loss is associated with encroaching old age, which has its own particular terrors for writers.

It’s not discussed in polite circles, age being the last remaining closet. But the truth is that there are commercial penalties for WWO — Writing While Old. One is no longer in the running for “hot new writer.” There is, sadly but inevitably, a tipping point at which the books become sexier than the author. Older writers in search of a new agent or publishing house are at a disadvantage compared to young writers with decades of work ahead of them.

Nor is hearing the only sense affected by age. Others may decline as well; yet fiction is grounded in sensory detail. A permanent dimming of sensation can force the older writer to resort to life’s pale cousin, memory.

Physically, writing a novel is far more labor-intensive than most people think. To produce a manuscript of 100,000 words, the writer might easily type five times that many in drafts. Travel, too, becomes more onerous as writers age and commercial planes devolve into sardine cans–yet nothing is more nourishing for writers than travel.

For some aging writers, there is also anxiety. Writing doesn’t come with a pension. This startling realization dawns on most writers around the time their non-writer friends begin retiring with comfortable nest eggs. No doubt it should have occurred to them sooner, but they were too busy reveling in the perks of their profession: setting their own hours, working at home, and making a living doing what they loved.

Fortunately, these drawbacks are offset by advantages that allow writers, unlike dancers or athletes, to continue playing at a high level even in old age. Experience is a great asset. One doesn’t need 20/20 vision to see into the human heart, the wellspring of all fiction. Older writers have lived, learned, read, suffered and survived more. “The afternoon knows what the morning never suspected,” said Robert Frost, who kept writing well into his 80s.

Older writers have skills, because the good ones never stop growing. They tend to value simplicity and clarity over ostentation. They put the story first. They’ve found their voice.

The extreme turbulence of youth is behind them. When productivity is the goal, it’s better to have suffered the slings and arrows of outrageous fortune than to be currently under fire.

Technology gives us tools as well. Google Earth is no substitute for travel, but it sure is a great backup. And writers afflicted with arthritis can now resort to first-rate dictation software.

Bottom line, it’s not as if we have a choice. Writers write, whatever the circumstances. As for me, I’m making my adjustments. I thought of handing out cards — “Speak up, I’m eavesdropping”—but decided that might have an inhibiting effect. Instead, I practice leaning in, though I find it’s not much needed. Recently in an airport departure lounge, I heard a young woman on a cell phone describe in excruciating detail the party she’d gone to the night before. She’d gotten wasted, she said, passed out, and woke the next morning in bed with a stranger. As the young woman strolled off, still spewing into her phone, a flash symposium broke out among the dozen or so stunned passengers within earshot.

I hate it that I don’t hear as well as I used to. These days, though, people talk more loudly and openly than ever before. It’s wonderful how things work out.

Barbara Rogan
Barbara Rogan is the author of eight novels and coauthor of several nonfiction books. Her latest novel, A DANGEROUS FICTION, is a mystery set in the publishing world, published by Viking Books/Penguin. She teaches fiction writing workshops online at www.nextlevelworkshop.com.

Barbara Rogan is the author of eight novels and coauthor of several nonfiction books. Her latest novel, A DANGEROUS FICTION, is a mystery set in the publishing world, published by Viking Books/Penguin. She teaches fiction writing workshops online at www.nextlevelworkshop.com.